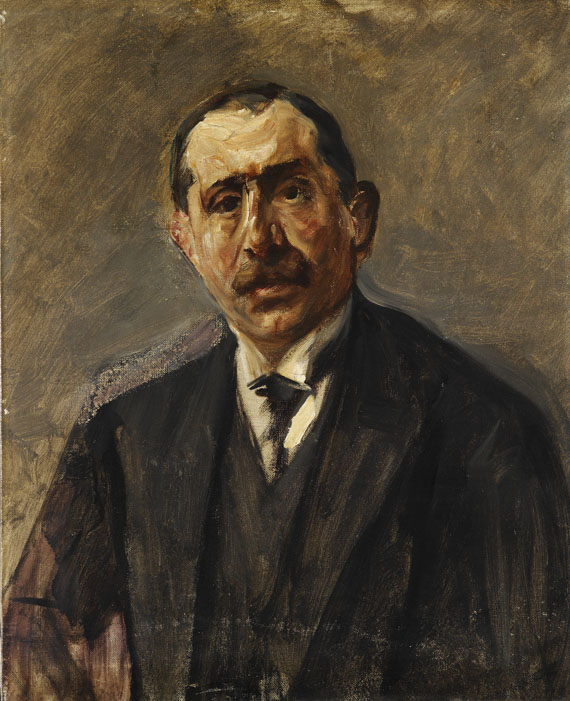 Max Liebermann began capturing his immediate environment on paper at the age of nine. When the renowned Berlin painter Carl Steffeck saw drawings by the fifteen-year-old he recommended that the boy's talent should be encouraged as much as possible - much against his parents ideas. Steffeck gave Liebermann his first drawing lessons and encouraged him to attend the Weimar Akademie. Liebermann studied in Weimar for three years until 1872. A trip to Düsseldorf in 1871 took the young artist to Mihály Munkácsy, a Hungarian painter who lived here. Liebermann was inspired by Munkácsy's Realism. Still under this impression, Liebermann painted his first large painting, 'Die Gänserupferinnen' (Girls plucking Geese). The unadulterated realism of this work, which was much rejected among the critics, was to become typical of Liebermann's art. He spent the years 1873 to 1878 in Paris and the artist colony of Barbizon. Here he studied the art of Millet, whose paintings of farm workers had a strong influence on him. A first sojourn in Holland in 1871 was followed by regular trips to the Netherlands, where he discovered suitable motifs for his most important works. His striving to elevate the life and work of the simple man to the realms of art in an unpretentious simplicity was not generally accepted. Liebermann continually fought for acceptance. Only after turning towards motifs and scenes of bourgeois life did he become the celebrated and sought after painter of the liberal bourgeoisie of the turn of the century. He spent the years 1878 to 1884 in Munich and then returned to his native town Berlin in 1884. Liebermann was an important personality not only as an artist but also as an art politician. At the beginning of 1892 he was a member of the 'Erste Sezession Deutschland', an organisation which he chaired in Berlin from 1898 to 1911.

This work is a study for the portrait of the German-Jewish bank director Julius Stern (*1958/59-†1914), which today is in possession of the ‘Städtische Museum Gelsenkirchen‘ (Eberle 1907/1). The Gelsenkirchen painting was made on commission of the ‘National-Bank für Deutschland‘ (1932 incorporated in Dresdner Bank) on occasion of the portrayed persons 25\up5 th anniversary in the bank. Besides his profession, Julius Stern was one of the biggest collectors of modern paintings in Germany in those days. Among his remarkable collection, which was sold by Cassirer in 1916, were works by great masters such as Cézanne, Corinth, Degas, Gaugin, Van Gogh, Liebermann, Monet, Picasso and Rodin.
Our oil study seems to have been the first approach that Liebermann made to execute a commissioned portrait. Unlike on the finished picture, which shows an arm chair and the hands of Julius Stern, Liebermann chose a closer section and allows the observer to feel closer to the portrayed person. The swiftly executed broad strokes of the brush, that seem a little sketchy in places of the jacket and become more powerful and virtuosic in the face, add a particular appeal to our study – one almost feels as if looking the artist over the shoulder in the process of creation.