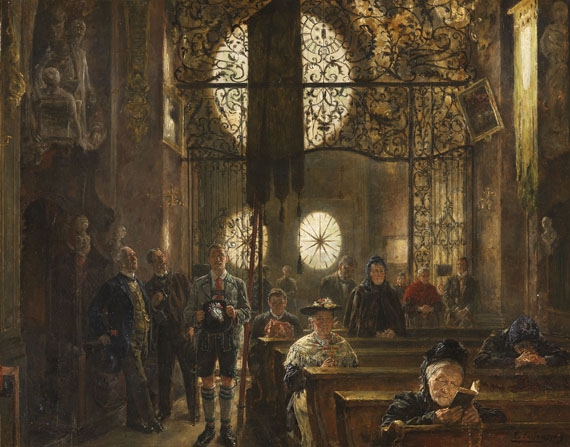 At first Carl Seiler studied Architecture at the Berlin Bauakademie (Building Academy ). In order to transfer to art he went to Munich and became student of Karl Raupp. Later he was teaching at the academies in both Berlin as well as in Munich. Seiler became particularly acknowledged for his church interiors as well as his genre scens.
This painting of the famous Munich Asam Church combines these two genres in an exquisite manner. Seiler put various persons in front of the church’s unique portal with the baroque details. The scene is illuminated by sunlight falling in through the church door’s three large windows, thus the ornaments on the cast iron grid are particularly emphasized. Seiler chose to depict persons of different character in this scene, illustrating them with great care and love for the detail. On the one hand, we see the believers on the right side: A distinguished old lady with rosary and prayer book in the front row, behind her further people devoutly attending service, seated or standing, some of them in traditional local costumes. On the other hand, there are two elegantly dressed gentlemen, which are interested rather in the church’s splendid architecture than in the mess. They lean on the confessional which is adorned with an allegoric figur, their eyes looking up to the frescoes on the ceiling. One of them even holds a lorgnette. These two architecture lovers earn scornful looks from a man standing in right with the believers. His look expresses his anger about the “tourist’s“ impiousness, however, they don’t seem to notice at all, turning their entire attention to the joy of art. [CB].

More Information
+
Sell
Get a free appraisal for a similar object!
+
Register for
Carl Seiler
+
Buying from A-Z
+
Contact a specialist
Share