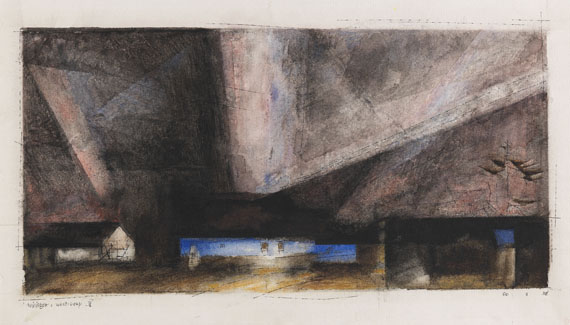 Lyonel Feininger developed his style under the influence of Cubism, it was characterized by a geometric construction of the image space and a diversification into transparent color fields. The artist dissects the motif into simple geometric and prismatic forms. Feininger sketched a couple of houses by mean of just a few strokes of the brush, he then joins them like bricks in a seemingly instable construction of squares, triangles and trapezoids. The gray rose sky the artist structured with single feather strokes is in tense contrast with the lucent blue house and roof. In 1932/33 he made numerous drawings and watercolors of a rather subdued coloring, reflecting the situation the artist was in: In context of the uprising National Socialism the Bauhaus, the school where he taught, had to move from Dessau to Berlin as early as in 1932, Feininger followed only in 1933. Just one year after Nazis closed the facility. [DB]