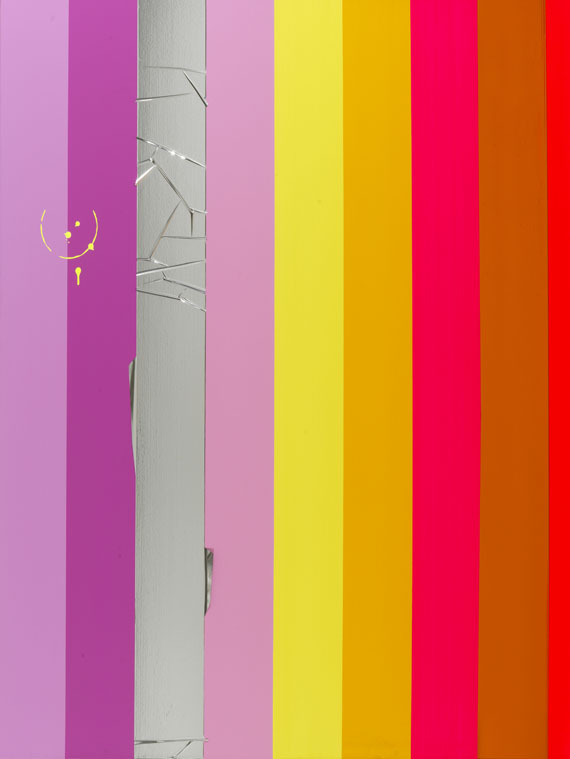 Anselm Reyle is one of the protagonists of contemporary art. Born in Tübingen in 1970, Reyle dropped out of school and did not complete a landscape gardening apprenticeship before he enrolled at the State Academy of Visual Arts in Stuttgart, transferring to the State Academy in Berlin a little later. There he joined artist colleagues such as Dieter Detzner, John Bock, Michel Majerus and Berta Fischer in the same studio. The galleries "Andersen's Wohnung" and "Montparnasse", of which Anselm Reyle was co-founder in the late 1990s, were also located in Berlin. They offered an effective platform to exhibit and promote his art.

Anselm Reyle attained his characteristic style at an early point. Typical features are materials such as foils, mirrors and lacquer as well as a focus on lucent, at times lurid and dissonant compositions. He has two different approaches that made for his international breakthrough. On the one hand, we’ve got his monochrome works made with either paint or draped foil. On the other hand, it is his famous strip images among which this work counts. It fascinates the observer with its gaudy colors and the mirror- and gloss accents the artist placed with great poise. Reyle‘s unusual compositions which burst in an ecstasy of color and material, are often created in an immediate occupation with materials of everyday use, things he discovers by incidence and that inspire him. Additionally, they have both witty as well as profound references to art history, for instance to Abstract Expressionism and particularly to Color Field Painting. With great poise Reyle interprets its clear and organized color spaces that unfold a calm and meditative effect by placing small breakages such as minimal creasing on the foils or cleverly applied spot, which make for a surprising joy of observation, just as it is the case with this work.

Later works increasingly stride to figuration and references in a Pop-Art manner the famous painting by numbers pictures, the sculptural aspect also gains in importance. Since 2009 Anselm Reyle has been teaching at the ‘Hochschule für bildende Künste‘ in Hamburg. His works have been shown in numerous group exhibitions. Acknowledged solo shows have taken place in the Modern Institute, Glasgow, in 2004, in 2006 in the Kunsthalle Zurich and in 2009 in the Kunsthalle Tübingen. On top. Works by Anselm Reyle are in possession of various international collection, such as the Centre Pompidou in Paris or the Collection Essl in Klosterneuburg near Vienna. [KP].

More Information
+
Sell
Get a free appraisal for a similar object!
+
Register for
Anselm Reyle
+
Buying from A-Z
+
Contact a specialist
Share