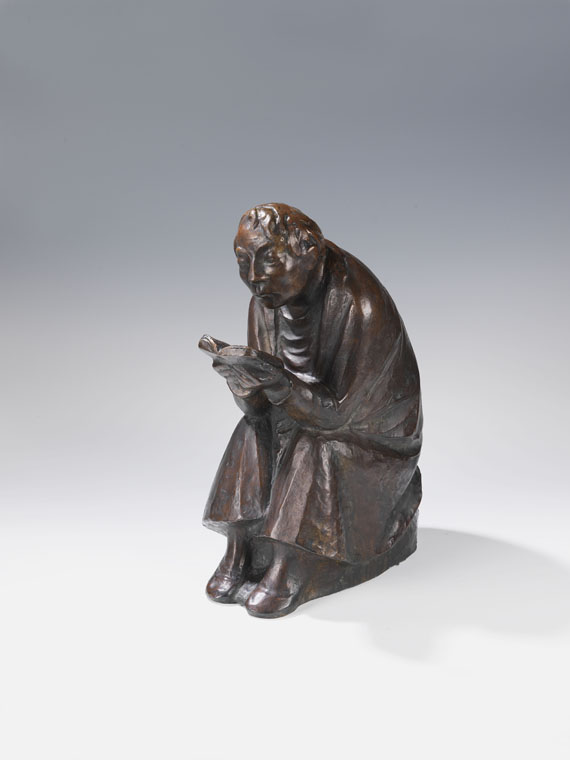 The Northern German sculptor and graphic artist Ernst Barlach began his professional education in Hamburg, where he joined the Gewerbeschule in 1888. He continued in 1891 at the Dresden Akademie where he continued his studies of sculpture and became Robert Diez' master pupil. Barlach's thorough academic training was supplemented by two sojourns in Paris in 1895 and 1897. His work was further influenced significantly by a trip to Russia in 1909. The powerful and folk-like style of his sculptures reflect the artists impressions of sturdy rugged farm life and Russian folk art. Barlach also produced graphic illustration cycles for his own plays during this period. The artist settled in Güstrow (Mecklenburg) in 1910. Barlach had his first exhibition at Paul Cassirer's gallery in Berlin in 1917 and was accepted as a full member of the Preußische Akademie der Künste in Berlin in 1919. In the following years Barlach made numerous woodcuts, for example the illustrations for Goethe's "Walpurgisnacht". His autobiography "Ein selbsterzähltes Leben" was published in 1928. The Preußische Akademie der Künste organized a comprehensive exhibition of his sculptures and graphic works in 1930. The artist was awarded the order Pour la Mérite in 1933. Even though Barlach was still able to complete the "Fries der Lauschenden" for Hermann F. Reemtsma and designed a grave monument for Theodor Däubler in 1935.

In his sculptures Ernst Barlach concentrated almost exclusively on the depiction of the human figure, endowing it with deeply human characteristics. Base on the then late Art Nouveau, Barlach attained his very own style which revealed a lot about his rootedness in humanism. Not following a classic ideal, Barlach formed a picture of the contemporary man in his plastics – with all his sublime and dismay. The massive plasticity that Barlach employed supported his will for a closeness to nature and reality, unlike the idealized depiction of man common in previous generations. Barlach did not recreate man, he just formed him the was he saw and perceived him. The 'Buchleser im Wind' (Book reader in Wind) is, despite all symbolic meaning, a figure from here and now, finding fulfillment in the dignity of being.

In the following years he was defamed by the National Socialists. His works were banned from all museums, churches and public spaces in 1936. Today Ernst Barlach is considered one of the most important sculptors of modern times. Outstanding examples of his Expressionist figures in wood and bronze can be seen in the cathedral in Güstrow, the church of St. Elisabeth Marburg and in the National Gallery in Berlin. His house and studio in Güstrow function as a museum today. [KD].