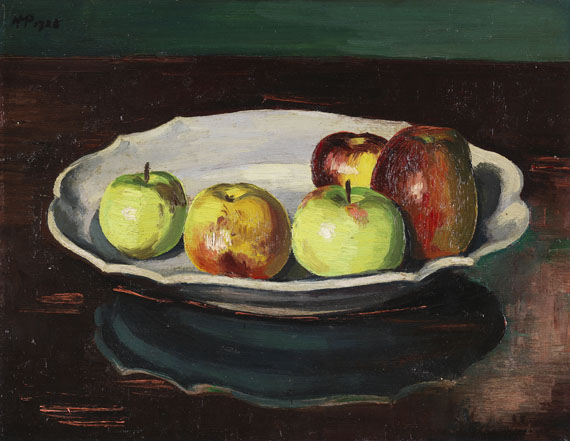 Max Pechstein's artistic talent was discovered and encouraged at a very early age. His conventional career, first as an apprentice with a Zwickau painting master, then at the Dresden Kunstgewerbeschule and finally at the Dresden Akademie under the decorative painter Otto Gußmann, provided Pechstein with a sound craftsmanship. His ceiling painting at the Dresden Arts and Crafts Exhibition in 1906, with such an unconventional color scheme that the organizers had it sprayed with gray paint to soften the colors, attracted Erich Heckel's attention. He then invited Pechstein to join the artist group 'Die Brücke' which had been founded the year before in opposition to Impressionism. The group's aim was to "attract all revolutionary and restless forces" (Schmidt-Rottluff) and an emphasis of the power of color in painting. In this environment Pechstein's Expressionist style developed further, concentrating on elaborating the focal point of the painting with a sparse painting technique. Pechstein moved to Berlin in 1908 and became a co-founder of the 'Neue Sezession'. He painted figures, still lives and landscapes in a moderately Expressionist style. Perhaps it was this, which lead to the artist's early and continuing success.

The history of the apple in art goes back to the beginnings of painting. It was he decisive element in depictions of Adam and Eve, it was a popular feature in pictures of Madonna with child, eventually becoming the subject, along with other fruits and flowers, of Dutch still lives in the 17\up5 th century. The late 19\up5 th century saw it with completely different eyes, more like a round plastic form. Cezanne placed it wit great care in a white bowl, isolated and with all its full beauty, it becomes the still life’s favorite object. Its form's cool objectivity coupled with the myth of Genesis may be one of the reasons why it still causes a certain fascination. Pechstein tried out his great artistic gift with five apples in a flat bowl. He adds modulated surfaces with a soft brush and lets mild reflections of light shine, as if confessing to a concept of painting that he had questioned a few years earlier. If one tried to compare painting with music, which at times lies close, then still life is like chamber music, as no great chords are played. Sound is softer, more individual and that is just why it is so striking.

From 1945 Pechstein taught at the Berlin Academy of Arts. Before that time, during the Third Reich, he was slandered as a "degenerate" artist. Apart from paintings his oeuvre includes more than 850 woodcuts, lithographs and engravings. [KD].