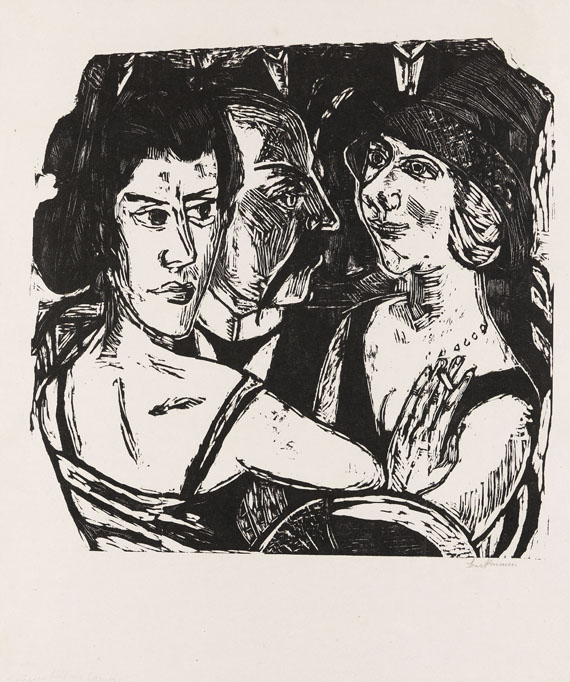 The bar in the Berlin Hotel Eden was, just as many other places in those days, meeting point of the Berlin high society that sought to encounter the trauma of the lost war with a hedonist lifestyle. These get-togethers, taking places every evening, were completely devoid of meaning to Beckmann – a characteristic he blatantly illustrates by means of the three people. Even though they sit close to one another, they don’t look at each other. Every one is gazing into an imaginary distance. Beckmann took on the theme of the strange feeling of an existential isolation amidst a group of jolly people and rendered it with great sensitivity. The back view of the seated Johanna Loeb closes the composition at the front. Johanna Loeb, who later emigrated, was a friend of Elsita Lutz, a singer from Argentina, sitting next to her. The man in the background, presumably Elsita Lutz’s husband, had business and friendships connections with Johanna Loeb’s spouse. Beckmann’s large woodcut is one of the most important ones made in the 1920s. In letters to Reinhard Piper and Julius Meier-Graefe, Beckmann expressed his enthusiasm for Fritz Voigt, the famous Berlin printer, who also printed the edition of this large woodcut.

With the success of the National Socialists the artist was increasingly defamed and finally dismissed from his teaching post. His works were removed from public collections in Germany. Political pressure forced him to emigrate to Holland in 1937. Here he was also restricted by the political situation, however, and an invitation to Saint Louis as a guest professor in 1947 was a welcome occasion to emigrate to the USA. This post at the Washington University School of Fine Arts was followed by teaching posts at the University of Colorado in Boulder in 1949, the Brooklyn Museum Art School in New York and Mills College in Oakland, California in the summer of 1950. Max Beckman died on 27 December 1950 in New York. [KD].