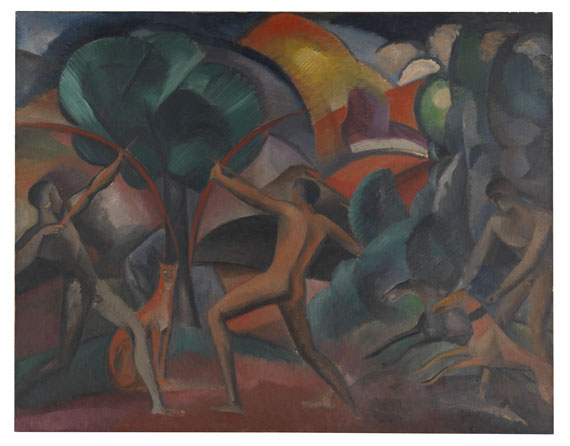 After completing his training at the Military Academy in Moscow, Vladimir Bekhteev starts to study painting at the Moscow Academy of Arts in 1902. On the advice of Jawlensky, he moves to Munich in same year, where he continues his studies with Heinrich Knirr until 1905. From 1906 to 1909, Bekhteev lives in Paris. Returning to Munich, he joins the 'Neuen Künstlervereinigung München' in 1909, which he leaves again in 1912 in protest against a self-publicizing attack by the group on abstract painting. Bekhteev’s works at this time, with their glowing use of color, are strongly influenced by Javlensky, whilst his shimmering lines are reminiscent of the works of Late Impressionism. Subsequently, he produces ornamentally flat compositions with an energetic color rhythm which nonetheless retain figurative references.

During his years in Munich, Bekhteev’s most important period of creation, the expressive work "Bogenschützen" (Archers) was made. Influenced by Art Nouveau, Bekhteev already anticipate upcoming developments and already hints at Art Déco. Even though he was part of the group “Blue Rider“ and the "New Munich Artist Association“, Bekhteev’s idea of man was geared at the idealistic concepts of Hans von Marées and Ludwig von Hofmann. The stretched and almost dancing body was his main theme. Bekhteev’ definitely worked up impressions of the dancer Sacharoff, who was close to the “Blue Rider“ and particularly to Alexej von Jawlensky. The slightly mannered idea of man is contrasted with a landscape that shows concepts of Cubism, however, without entirely taking it up. Additionally, the reception of ancient Egypt shows influence on Bekhteev’s style. Subjects constructing an artistic ideal world are coined by optical elegance a a poised colorist framework. With this composition Bekhteev matched the taste of a bourgeoisie elite that sought fulfillment in an unreachable arcadia, despite all contemporary reality.

With the start of the First World War, Bekhteev’s artistic development breaks off abruptly. He returns to Russia and is called up for military service immediately. After this, Bekhteev works initially in the Moscow Commission for the Preservation of Historical Monuments, and then, in the years 1921/22, as a stage builder, later becoming Design Manager of the Moscow State Circus. In the 20s and 30s, he works mainly as an illustrator. In addition, he devotes himself in his later works to water colors and gouache, in addition to oil painting. Bekhteev was accorded increasing recognition in his own country after the end of the Stalinist era. [KD/ATh].