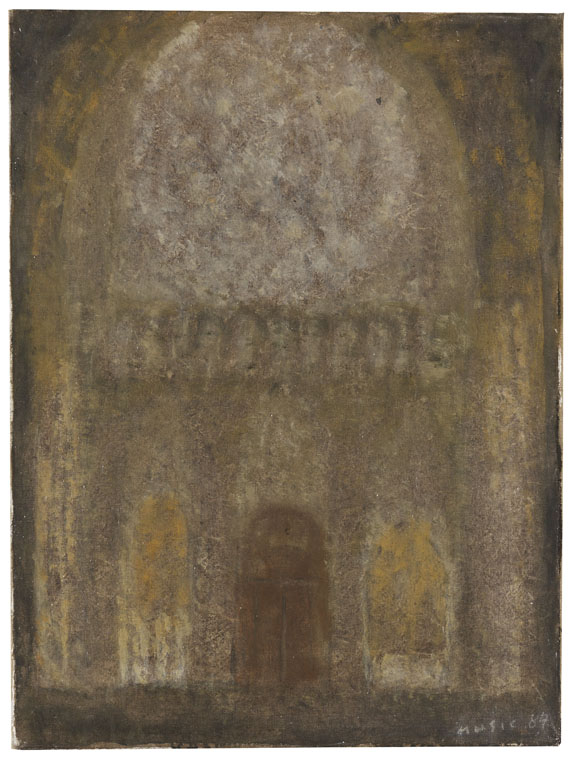 After finishing his studies at the art academy in Zagreb Music began his career with extensive travels in 1934. He spent three months in Madrid, later he turned to Maribor and Ljubljana. He moved to Venice in 1943. Music was deported to Dachau in 1944 where he franticly sketched the life in the camp under extremely difficult circumstances. After his liberation in 1945 Music returned to Venice where he won the first prize at the Bienniale in 1950. Other prizes followed in 1951 and 1952 when Music was awarded the Prix de Paris, first together with Corpora and then alone. A new beginning in painting evolved around the artist's preoccupation with the Dalmatian landscapes of his childhood. A next step was an awakened interest in his direct environment, Italian landscapes. Stylistically he was influenced by Byzantian mosaics and icons from Venice. Since the 1950s he also works in Paris. Here the 'lyrical abstraction' of the French Informel determined the art world but Music took is own way. He kept his studio in Venice, however, and exhibited again at the Biennale in 1956 and 1960. This time the artist was awarded the great prize for his graphic work and the UNESCO Prize. During the 1960s his organic motifs became more and more abstract and his compositions abandoned the laws of three-dimensionality. The much acclaimed series 'We are not the Last', in which the artist transformed the terror of his experiences in a concentration camp into documents of universal tragedy, was made in the 1970s.

"He and his art are characterized by a balanced and contemplative temper that tends to meditation, a temper that loves silence rather than action" (Zoran Music, ex. cat. Mathildenhöhe, Darmstadt 1977, p. X). This atmosphere is also conveyed by our painting – both througfh choice of motif as well as through the unmistakable style with simple and reduced forms.

Music's work has been honored in numerous international exhibitions, such as the large retrospective exhibition at the Grand Palais in Paris in 1995 and in his retrospectives from Rome to Gorizia and Barcelona. In 2005 the artist dies in Venice. 2009/10 an extensive exhibition takes place in Ljubljana. [KP].