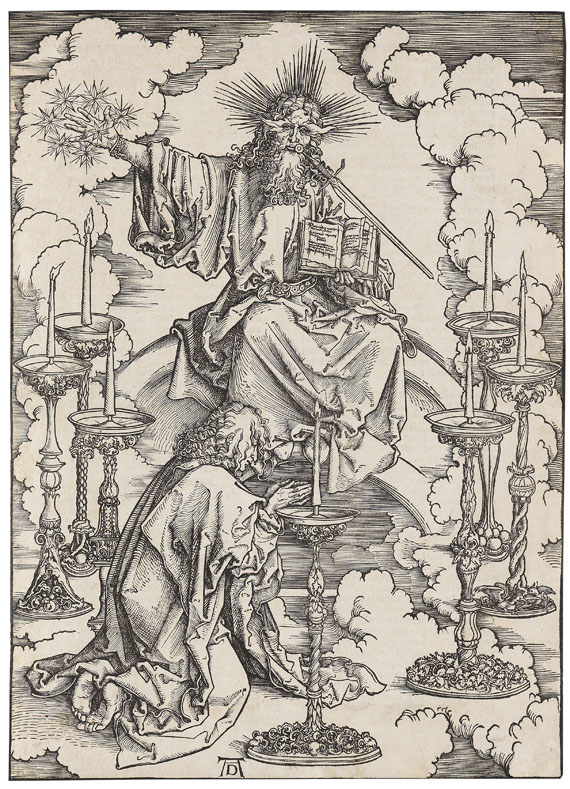 Dürer‘s apocalypse was released in 1498, a time at which people strongly believed in a coming apocalypse for the turn of the century in 1500. The success of his apocalypse is in the powerful illustration, which was model to artists of all following centuries. The overall fame of Dürer also goes back to this series of woodcuts. After the title leaf and an illustration of the Sufferings of John the Evangelist the sheet “John sees the seven-branched candelabrum“, the first figure of the actual visions. Dürer created an impressive composition, which, just as the text, opens the series of the following visions.
John wrote: ” And turning to see the voice which said these words to me, I saw seven gold vessels with lights burning in them; And in the middle of them one like a son of man, clothed with a robe down to his feet, and with a band of gold round his breasts. And his head and his hair were white like wool, as white as snow; and his eyes were as a flame of fire; And his feet like polished brass, as if it had been burned in a fire; and his voice was as the sound of great waters. And he had in his right hand seven stars: and out of his mouth came a sharp two-edged sword: and his face was like the sun shining in its strength. And when I saw him, I went down on my face at his feet as one dead. And he put his right hand on me, saying, have no fear; I am the first and the last and the Living one; And I was dead, and see, I am living for ever, and I have the keys of death and of Hell. Put in writing, then, the things which you have seen, and the things which are, and the things which will be after these; The secret of the seven stars which you saw in my right hand, and of the seven gold vessels with burning lights. The seven stars are the angels of the seven churches: and the seven lights are the seven churches. “ (Revelation 1,12-20). [CB].