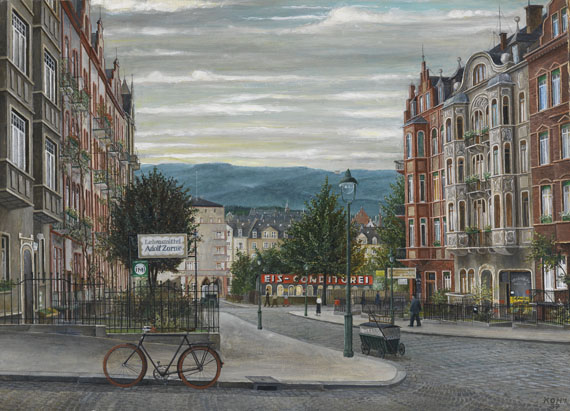 Karl Otto Hy began his artistic career with an apprenticeship as decoration painter at the Wiesbaden School of Applied Art in 1924. In 1928/29 he studied at the Mainz School of Arts and Crafts, where he focussed on graphic work. As of 1930 the freelance artist showed his art in many exhibitions. Along with Alois Erbach, Conrad Felixmüller and Alexej von Jawlensky his works were shown in the exhibition "Three Generations of Artists from Wiesbaden " in 1980. In the meantime the artist was active for the Mainz building authorities and helped with the restoration of public buildings. His art was focussed on an exact rendering of architectural details. Hy‘s preferred motifs were portraits, still lives and landscapes that show a cool view onto reality, which puts the artist close to New Objectivity. [CB].