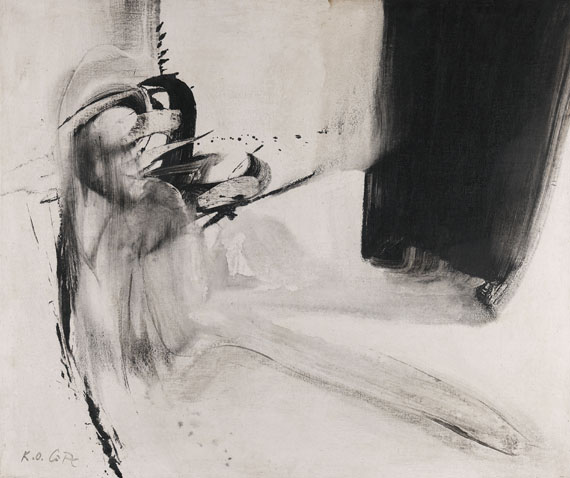 Karl Otto Götz was born in Aachen on 22 February 1914. He started painting when he went to secondary school in 1924. In 1930 he began to create abstract paintings, shortly afterwards he experimented with collages. In December 1945 he married his friend Anneli Brauckmeyer, with whom he has two children. In the late 1940s he made abstract compositions, surrealistic photo-experiments and abstract-figurative monotypes. He abandoned figurative art altogether in 1949 and was the first German to join the COBRA group. Götz was a co-publisher of the magazine 'Meta' from 1948 to 1953.

After he co-founded the Frankfurt "Quadriga", an artist group that stood for a Tachism influenced by Wols and Automatism, Karl Otto Götz' artistic development took a decisive turn in 1952. The so far solid forms were now replaced by a more dynamic style achieved by using a special three-step squeegee technique. This new style would prevail in Karl Otto Götz’ art in future times. In three quick process steps dark paint is applied to the light background with the brush, afterwards it is partly ablated with the squeegee. The characteristic patina of Götz' paintings originates from the painting process in which the artist applies glue before the painting process begins and finally seals the painting with slightly liquid bee wax. With some paintings made around 1955 the method of transparent glazing, which was later abandoned, made for a special effect.

From 1959 to 1979 Götz, being one of the main representatives of the Informel, taught at the Dusseldorf Academy, where he had decisive impact on young artists, such as Sigmar Polke and Gerhard Richter. Götz has been living and working in Wolfenacker in the Westerwald since 1975. Karl Otto Götz is one of the most important members of the German Informel and soon enjoyed international recognition, for example at the documenta II in 1959. During the two decades in which the artist taught at the Kunstakademie in Düsseldorf Götz influenced artist personalities as diverse as HA Schult, Sigmar Polke and Gerhard Richter. [KP/JS].