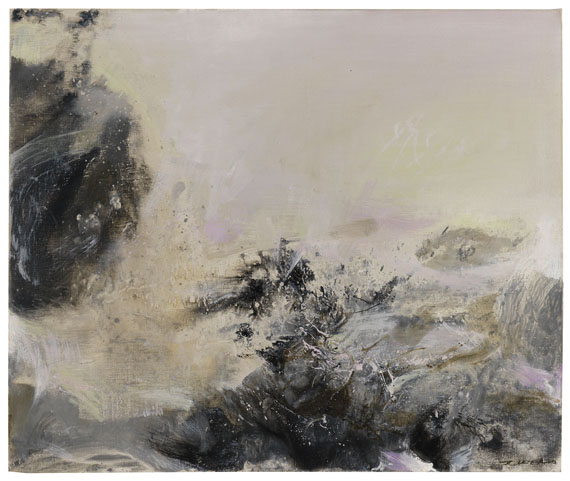 At the tender age of fourteen, Zao Wu-Ki began to study oil painting at Hangchow (Hangzhou) Art Academy. Between 1941 and 1947 he was a professor there and had his first one-man show. The young artist was greatly impressed by the European moderns. In 1948 Wu-Ki emigrated to Paris, where he met Henri Michaux, Alberto Giacometti, Joan Miró and Maria Elena Vieira da Silva. In Paris Wu-Ki took courses at the Académie de la Grande Chaumière and learnt lithography. Only a year after his arrival Wu-Ki had his first solo show in Paris, at the Galerie Creuze, which would be followed by others across Europe. In 1953 Wu-Ki designed the scenery and costumes for the R. Petit ballet 'La Perle'. In 1955 Wu-Ki was awarded with the prestigious Carnegie Prize in Pittsburgh. Zao Wu-Ki traveled through the US in 1957/58. In 1964 he was naturalized as a French citizen and had his first large-scale retrospective at the Folkwang Museum in Essen in 1965.

In the course of his artistic development Zao Wou-Ki increasingly abandoned figuration and turned towards a synthesis of Eastern calligraphy and European Informel. His poetic abstract pictures lead to associations of cosmic landscapes, just as it is the case with this work that calls reminiscence of niveous landscapes or dark rocks under a fume. Zao Wou-Ki plays with dark and light contrasts, contrasts between hard and soft, between fragile and symbolic structures and expansive color fields, thus creating a composition of a striking and timeless beauty.

In the 1970s Zao Wu-Ki went to China several times and embarked on a series of paintings in the Chinese tradition in India ink. As a friend of H. Michaux and André Malraux, Wu-Ki collaborated on numerous illustration projects. In 1980 he was appointed professor at the École Nationale upérieure des Arts décoratifs. In the 1990s Zao Wu-Ki was given several honorary doctorates and was distinguished with the Japanese Premium Imperial Award. His work has been shown regularly at major international exhibitions, including the 1996 Venice Biennale. [KH].