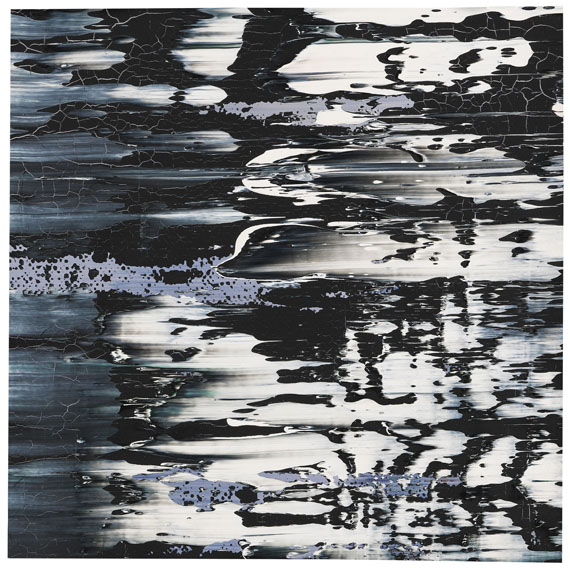 After his studies of painting in Dresden from 1951 to 1956 and the three years that followed as a master-class student at the Academy, Richter emigrated to the Federal Republic of Germany. A large cache of early work, long believed to have been lost, dates from that period. Only a few of these works have survived. From 1961 to 1963 he studied under Karl Otto Götz at the Duesseldorf Academy of Arts. It is there that he became friends with Sigmar Polke, Blinky Palermo and Konrad Lueg - who was later known as the art dealer Konrad Fischer - , with whom he performed the "Demonstration in favour of capitalist realism" as a German version of Pop Art in 1963. In 1962, influenced by Giacometti and Dubuffet, he started with representational paintings based on photographs. This was the result of a changed view on art, which, according to Richter, "has nothing to do with painting, composition or color". His first solo exhibitions took place in 1964 at the galleries of Heiner Friedrich in Munich and Alfred Schmela in Duesseldorf. In 1967 Richter became guest lecturer at the Academy of Fine Arts in Hamburg and in 1971 he was offered a chair at the Academy of Arts in Duesseldorf, which he held until 1996. Further visiting professorships from the College of Art in Halifax, Canada, in 1978 and the Städelschule in Frankfurt in 1988 followed. In his alpine and urban paintings of the end of the 1960s, the photographic pattern is reflected in thickly applied spots of color. With his color field series from 1971 to 1974, in which the artist he used the four primary colors faceted and in arbitrary combinations as well as his monochrome grey paintings of 1972-1975, Richter made decisive painterly components his subject. In 1976 Richter started to do abstract pictures with colored streaks, but nevertheless returned to representationalism again and again and turned the alternation between techniques of representation and stylistic incongruity into a principle. In 1997 his "Atlas" - a systematic collection of photographs and painted sketches - was exhibited a the documenta X in Kassel.

In his works Richter puts more of an emphasis on the creative process and less on the result: "Life is not what has been said, but the telling, not the image, but its creation " – which is well proven by this work. It was produced by cutting the picture "813-1". He cut the discarded image into 64 pieces that are rearranged to new works of what he calls a ‘planned spontaneity‘. "I accept that I can not plan anything. Every thought I have on the composition of a picture is incorrect, and if the execution succeeds, then just because I partially destroy it or because they still work. [.] The only consolation is telling myself that I made the pictures anyway, even if they follow their own rules against my will, that they do what they want, and that they somehow emerge [.] "(Richter, transl. quote after Zweite, pp. 81f .).

Today Gerhard Richter is regarded as one of the internationally best known and most successful contemporary artists, whose works are appreciated by a wide audience on numerous exhibitions. [KH/EH]