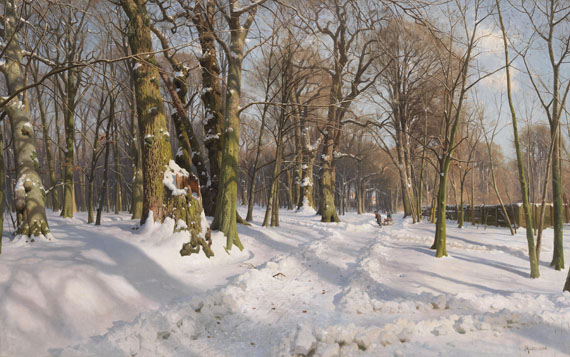 Peder Mönsted was born the son of a ship builder near the town of Grenaa in Jütland in 1859. From an early point on his talents were fostered at the art school in Aarhus, so that he began his studies at the academy in Copenhagen at the early age of 15. After he had completed his studies in 1879 he traveled at first his home country Denmark, followed by journeys to Germany and Italy. It was especially sojourns to Rome, Naples and Capri that coined Mönsted, who was deeply impressed by southern lights and colors. His return journey took the painter through Switzerland and France to Paris, where lived and worked for a couple of months in the studio of the French painter William Bouguereau in 1882/83. In 1889 Mönsted married Elna Margrethe Sommer, and went to Algeria with her the same year. By invitation of the Greek king Georg I., second son of the Danish king Christian IX., Mönsted spent half a year with the royal Greek family in 1892 and also visited Malta, Corsica and Egypt. During these days he made portraits of the king and his family. Over the following years Mönsted went on numerous journeys to Southern Europe and Northern Africa. His oeuvre is dominated by the variety of impressions and experience gained, by the diversity of nature and landscapes. Next to several portraits, it is especially landscapes that made for Mönsted’s great success in exhibition in Denmark, Munich, Berlin and the Parisian salon. In 1941 Mönsted died in Fredensborg as a well-renowned man. He counts among the most famous international landscape painters at the turn of the century.

Mönsted gained particular fame for his lifelike snow landscapes in an almost photorealistic style. With great mastery he executes both the tree’s barge structure as well as shades and reflections of the snow-covered ground in brilliant colors and a vivid stroke of the brush. Two children with a sleigh in the image’s center serve as lively staffage in the hibernal nature. These landscapes in Mönsted‘s preferred format are very rare on the international auction market. [CB].