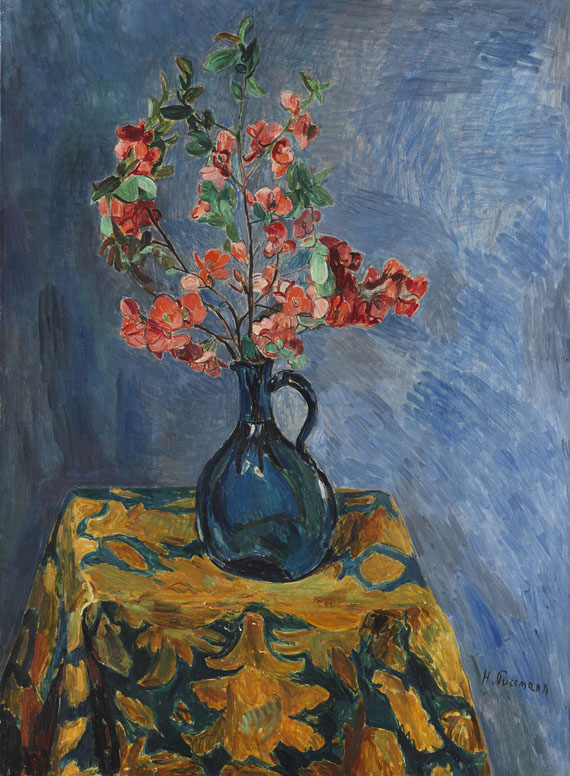 Accompanied by written expertise from Hans Purrmann Archive, Munich, from 30 April. 2013. The work is registered under the archive no. 1405 and will be included in the forthcoming catalog raisonné.

Hans Purrmann served an apprenticeship as a house painter in his father's business before beginning his studies at the Karlsruhe School for the Applied Arts in 1897-99, where he met the painter Rudolf Levy. He continued to study during the winter months at the Fine Arts Academy in Munich at first at Gabriel von Hackl's drawing class and then at Franz von Stuck's painter's class. The young Purrmann went to Paris in 1905, where he met Henri Matisse in the circle of German painters in the Café du Dôme. In 1908 and partly at the suggestion of Sarah Stein, he founded the 'Académie Matisse', with Friedrich Ahlers-Hestermann, Franz Nölken and Mathilde Vollmoeller, who would become his wife, as his first pupils. That year Purrmann accompanied Matisse to Germany, where he also spent time twice in 1909/10. The outbreak of the first world war caught him in Beilstein, Württemberg, where he stayed for two years, during which his possessions in Paris were confiscated. Purrmann began to attend to printed graphics until the 1920s. In 1916 he settled in Berlin, where he participated regularly in exhibitions of the ‚Free Secession'. During this period he made friends with Karl Scheffler and worked with him on Scheffler's magazine, 'Kunst und Künstler' ('Art and Artists'). In 1918 the first one-man show took place at Paul Cassirer's gallery in Berlin. At the suggestion of Liebermann and Slevogt, Purrmann was made a member of the Preussische Akademie der Künste (Prussian Academy of the Arts). The academy wanted to appoint him a professorship, but he refused. He also went on several study trips to Italy in the 1920s, where he copied Old Master paintings. In 1931 Purrmann received the order to design the front side of a conference room at the Kreistag in Speyer and he decided in favour of the subject ‚allegory of art and science' in form of a triptych.

In front of a monochrome background Purrmann creates this floral still life, allowing the viewer to let the effect of the filigree formation of the quince branches and the blossoms sink in. Only the tablecloth, its motif can be found in other oil paintings (see Lenz / Billeter 1921/12, 1921/13, 1926/15 and 1928/22), is endowed by the artist with additional emphasis. "It is indicative of Purrmann that he has painted numerous bouquets. Is there a painter of whom there are so many preserved? [.] The open flowers, their great variety, different shapes and colors are the most immediate expression of a life full of beauty. By dedicating his life and art to these bouquets, Purrmann celebrated each and every singly creation. They are present at every step of his artistic creation, next to the other genres, they make for an important field. "(transl. Of quote from Christian Lenz from: Purrmann. Die Gemälde I 1895-1934 Hirmer Verlag, Munich 2004, pp. 41 and 42.).

In 1935 Purrmann moved to Italy where he was honorary head of the Villa Romana in Florence. His art was classified ‚degenerate' in Germany, his works were removed from public museums and he was banned from exhibiting. These facts weakened his position in Florence. Purrmann's flat in Berlin was destroyed in 1943 and, after the fall of Mussolini, the artist fled to Switzerland. He settled at Montagnola in the Ticino, where he made friends with the writer Hermann Hesse. In 1946 the artist resumed his publicist work. The following years were shaped by numerous exhibitions and several honours. On the occasion of his 80th birthday the largest on-man show took place at the Kunstverein Hanover. Hans Purrman died in Basel on 17 April 1966. [DB].