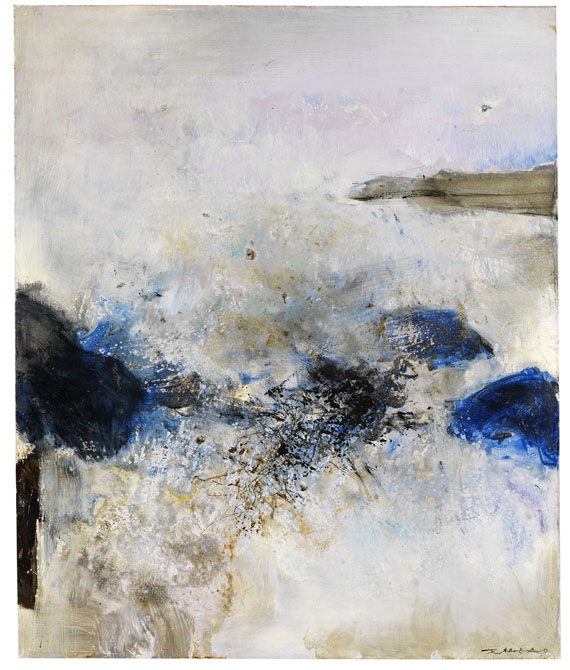 The work will be included in the forthcoming Zao Wou-Ki catalogue raisonné in preparation by Françoise Marquet, assisted by Yann Hendgen.

At the tender age of fourteen, Zao Wu-Ki began to study oil painting at Hangchow (Hangzhou) Art Academy. Between 1941 and 1947 he was a professor there and had his first one-man show. The young artist was greatly impressed by the European moderns. In 1948 Wu-Ki emigrated to Paris, where he met Henri Michaux, Alberto Giacometti, Joan Miró and Maria Elena Vieira da Silva. In Paris Wu-Ki took courses at the Académie de la Grande Chaumière and learnt lithography. Only a year after his arrival Wu-Ki had his first solo show in Paris, at the Galerie Creuze, which would be followed by others across Europe. Taking Paul Klee as his model, Wu-Ki increasingly distanced himself from representational painting, turning instead to a synthesis of Eastern calligraphy and European Informel. His poetic abstract pictures evoke associations of landscape and cosmic implications. In 1953 Wu-Ki designed the scenery and costumes for the R. Petit ballet 'La Perle'. In 1955 Wu-Ki was awarded with the prestigious Carnegie Prize in Pittsburgh. Zao Wu-Ki travelled through the US in 1957/58. In 1964 he was naturalised as a French citizen and had his first large-scale retrospective at the Folkwang Museum in Essen in 1965.

Throughout his artistic career Zao Wou-Ki increasingly moved away from representational painting and turned to a synthesis of Eastern calligraphy and European Informal. His poetic and abstract images evoke associations that remind the viewer of landscapes. Looking at the painting offered in our auction from this perspective, the idea of a wildly foaming sea spray raging between contrasting dark rocks, or a flat land tongue that smoothly extends into the sea in the upper right section. The painter succeeds with mastery to induce almost synaesthetic sensations it seems as if we can hear the spray, the patter of drops of water and the sound of waves. Thus, Zao Wou-Ki creates not only a composition of haunting, timeless beauty, but creates an own fascinating image cosmos.

In the 1970s Zao Wu-Ki went to China several times and embarked on a series of paintings in the Chinese tradition in India ink. As a friend of H. Michaux and André Malraux, Wu-Ki collaborated on numerous illustration projects. In 1980 he was appointed professor at the École Nationale upérieure des Arts décoratifs. In the 1990s Zao Wu-Ki was given several honorary doctorates and was distinguished with the Japanese Premium Imperial Award. His work has been shown regularly at major international exhibitions, including the 1996 Venice Biennale. [KP]