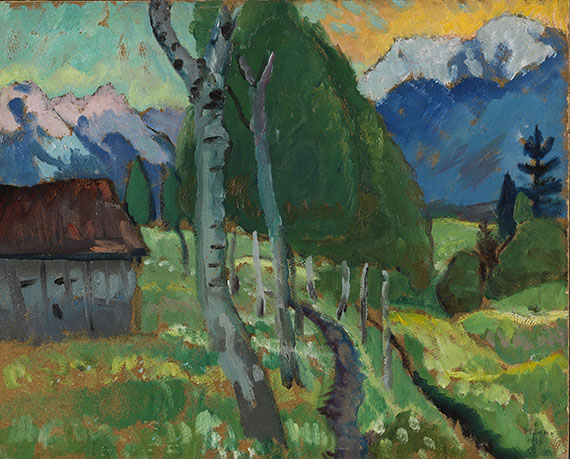 Accompanied by a photo expertise issued by Franz Resch, Gauting, dated 23 February, 1969. The work was registered under the archive no. 170.
According to the kind information from Ilse Holzinger, Gabriele Münter and Johannes Eichner Foundation, Munich from 15 October, 2002, the work is registered in the archive.

Gabriele Münter received her first art lessons at the 'Damen-Kunstschule' (Ladies Art School) in Düsseldorf and then attended the Society of Woman Artists as M. Dasio's and A. Jank's pupil. Then she went to Munich where she visited the private art school 'Phalanx' which was run by Wassily Kandinsky. In 1904 Münter and Kandinsky began travelling together: to Holland, Italy, France - where they met Rousseau and Matisse - and elsewhere. Stylistically she now distanced herself from Impressionism and her works began showing Fauve and Expressionist influences. In 1908 she and Kandinsky began leading a calmer life in their apartment in Munich. They often met with Klee, Marc, Macke, Jawlensky and Marianne von Werefkin. The country house Münter bought in Murnau provided an ideal working environment. In 1909 the artist began painting glass, a medium which would later also be adopted by Kandinsky, Marc, Macke and Campendonk. Münter was a member of the 'Neue Künstlervereinigung München' for two years and in 1911 she joined the 'Blaue Reiter', the artist group founded by Kandinsky and Marc. She was interested in Kandinsky's development towards abstract art, but her own works continued to be figurative. Her landscapes, figurative scenes and portraits show a reduction to the essential with an inclination towards humorous characterisation. When war broke out, Münter and Kandinsky at first moved to Switzerland. Münter, however, decided a year later to go to Stockholm, where she separated from Kandinsky. In late autumn 1917 she moved to Copenhagen. She travelled a lot during the 1920s and spent some time in Munich, Murnau, Cologne and Berlin.

From 1915 to 1920 Gabriele Münter lived in Scandinavia. This period also saw the final separation from Wassily Kandinsky. After her return she had to catch up with the German artist circle again. Since it is mainly drawings that have survived from the early twenties, the legend consolidates that Münter did not paint at all in this time. However, around 1923 she returns to painting and it is the Murnau motifs that are mark her rediscovery of this medium. The duct is more resolved, earthen colors takes the place of the black-contoured, almost homogeneous color fields, which had determined her work until then. The artist sees the new landscape with new eyes. She traces the different color values, but can still draw on the wealth of her experience, which allows a choice of colors far from late-impressionistic expression. On the contrary, Münter used, although substantially mitigated, the old color canon of a strong palette. As before, the forms are solidified in themselves, in this work it becomes particularly obvious in her treatment of the trees and the mountains. The bold separation of the composition through the front birch trunk does not even hint at a hesitancy that is often seen in conjunction with her depressions occurring after returning from Scandinavia. It is a powerful, spontaneous painting that adds a freedom of design to the image that we expect from Münter's best works. The environment of the artist changed. After years of restless wandering, she found the true determination for her mature paintings in the Murnau landscape. She can resort to former experience without repeating herself. It is a new, calmer perspective on things.

After 1931 she spent most of her time in Murnau and Munich. In 1956 she received the Culture Prize of the City of Munich. The year 1960 saw the first exhibition of Münter's work in the US, followed in 1961 by a large show in the Mannheim Kunsthalle. The artist died in her house at Murnau on 19 May 1962. [KD]