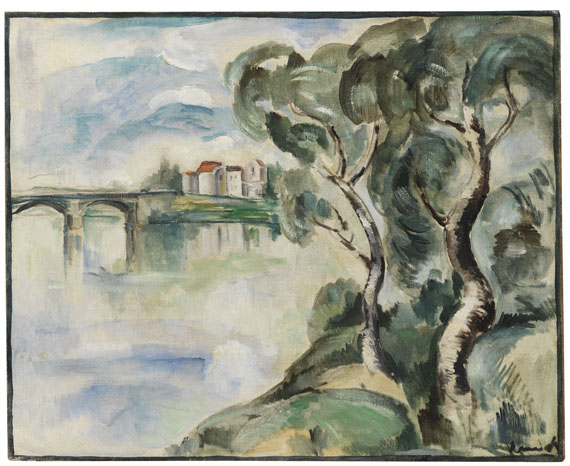 Accompanied by a photo expertise issued by Gilbert Pétridès on 19 November, 1986.
The work will be included by the forthcoming catalog raisonné by the Wildenstein-Institute.

Maurice was three years old when his family moved from Paris to Vésinet. He first pursued the same musical career as his parents, who were both musicians, leaving his home as a trained double-bass player in 1892 to move to Chatou near Versailles. After absolving his military service in Vitré Vlaminck worked as a musician until he accidentally met André Derain in 1900. It was Derain who kindled Vlaminck's artistic ambitions. He decided to become a painter and rented an old hut in which he and Derain shared a studio. A crucial turning point in Vlaminck's artistic development was a visit to a van Gogh exhibition in Paris in the following year. In 1902 the young painter met Henri Matisse, who encouraged him to exhibit at the 'Salon des Indépendents'. In 1905 Vlaminck had a group exhibition with Matisse, Derain, Friesz, Manguin and others at the 'Salon d'automne'. The radically new color scheme with large areas of pure color inspired the critic Vauxelles to refer to the artists as the 'Fauves'. The lively acceptance of this new painting style is reflected in the following acquisition of Vlaminck's entire work by the art dealer Ambroise Vollard. He also arranged the artist's first one-man exhibition in 1906.

His Seine landscape had been an integral part of French art since the early 19\up5 th century. The famous "silver" light was cultivated. It adds the special appeal of an extremely delicate palette of matte green and gray shades to the landscapes, just here and there interrupted by small color accents. Vlaminck also sought this effect and exemplarily captured it in this painting. Combined with a seemingly slow calmness of the river, which looks more like a lake, Vlaminck succeeds in visualizing a landscape impression that is quite characteristic of his Seine landscapes. The elated rhythm of the group of trees adds a slight dynamic, which endows the calm scene with a pleasant motion.

After his release Vlaminck established a small studio in Paris where he prepared for his next exhibition. It took place in 1919 at Druet, bringing about the artist's definite break-through. The show was so successful that he was able to buy a house in Valmondois in the same year. Here, in this rural environment, Vlaminck was finally able to develop his own style as a landscape painter. His interest in rural landscapes never ceased, even after his move to the Département Eure-et-Loire in 1925. His work was honoured in numerous international exhibitions during the 1930s. The last years of Vlaminck's life were determined by his friendship with the Swiss doctor Sigmund Pollag, who collected the artist's graphic oeuvre and donated it to the Kunstmuseum Bern in 1970. Vlaminck wrote more than 20 books, including autobiographic texts. [KD].