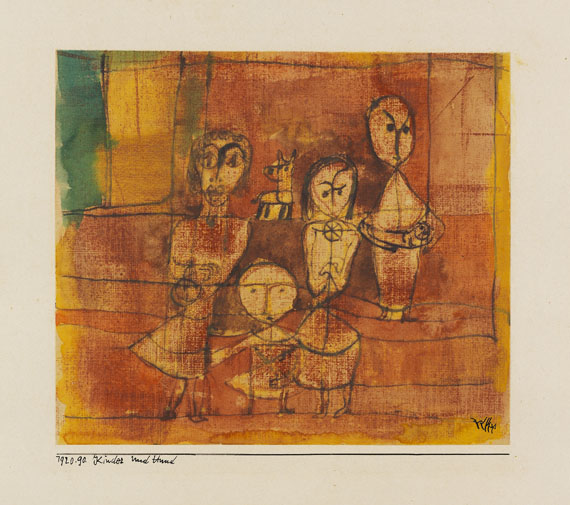 Paul Klee was born in Münchenbuchsee near Bern on 18 December 1879. In 1898 he decided to move to Munich, where he studied etching and drawing under Heinrich Knirr. Two years later Klee began to study painting at the Munich Art Academy under Franz von Stuck. His first travels took the painter to Rome in 1901/02 and, in 1905, to Paris. Participating in 1908 in the exhibitions mounted by the Munich and Berlin Secessions, Klee met Wassily Kandinsky, Franz Marc and Hans Arp, who would exert the formative influences on his work. Taking part in the second 'Blauer Reiter' exhibition in 1912, Klee met more distinguished contemporaries, such as the artist Alexej von Jawlensky, the poet Rainer Maria Rilke and the writer and composer Herwart Walden. The following year Klee showed work at the First German Herbstsalon. At that time he also did his first watercolors. From 1914 he increasingly devoted himself to working in this medium, most notably during the trip he took to Tunisia with August Macke and Louis René Moilliet. After a two years' stay there, Klee returned to Germany, where he was invited in 1920 by Walter Gropius to teach at the Bauhaus in Weimar. There he worked at first as a Formmeister (Master of Design) and later taught in the free-form painting class.

The Bauhaus years are regarded his happiest and most productive, inspired by the students and colleagues, he experimented in different directions. In terms of quantity, he created a work volume that he had never reached before. At the same time, he had an international breakthrough with the artist group "Die Blaue Vier" (The Blue Four). Galka Schreyer makes it her mission to establish Jawlensky, Feininger, Kandinsky and Klee on the American art market. With a twinkle in his eye, Paul Klee calls Galka the 'nanny' of the group of artists. She starts an unmatched marketing campaign, with lectures, slide shows and exhibitions of the group. On some of these exhibitions our lovely little work was presented and finally came into possession of Diego Rivera, the famous Mexican artist and husband of Frida Kahlo. In 1931 Galka was able to win Rivera for writing texts for exhibition catalogs. In this context, Rivera bought some pictures of Paul Klee for his wife Frida. Even if it is not provable, it is still a charming idea that our humorous watercolor found a place in the studio of Frida Kahlo and perhaps inspired her to her own artistic work.

An appointment as professor at the Düsseldorfer Academy in 1930 released Klee from his contract with the Bauhaus. Three years later, however, pressure from the National Socialists brought about Klee's dismissal from the Düsseldorf Academy and he moved to Bern. In 1937 the National Socialists removed 102 works by Klee from German museums and that same year 17 of his works were shown at the notorious exhibition of 'Degenerate Art'. This was the period of the Beam-Stroke pictures and the tragic, demonic figurations which indicate Klee's premonitions of death. Not long after the Zurich Kunsthaus devoted a one-man retrospective to him, Paul Klee died at Muralto (Ticino) on 29 June 1940. [SM]