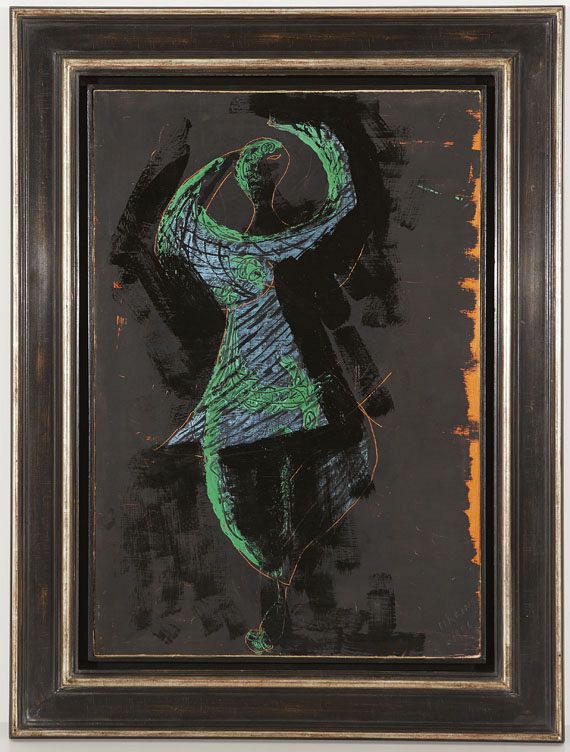 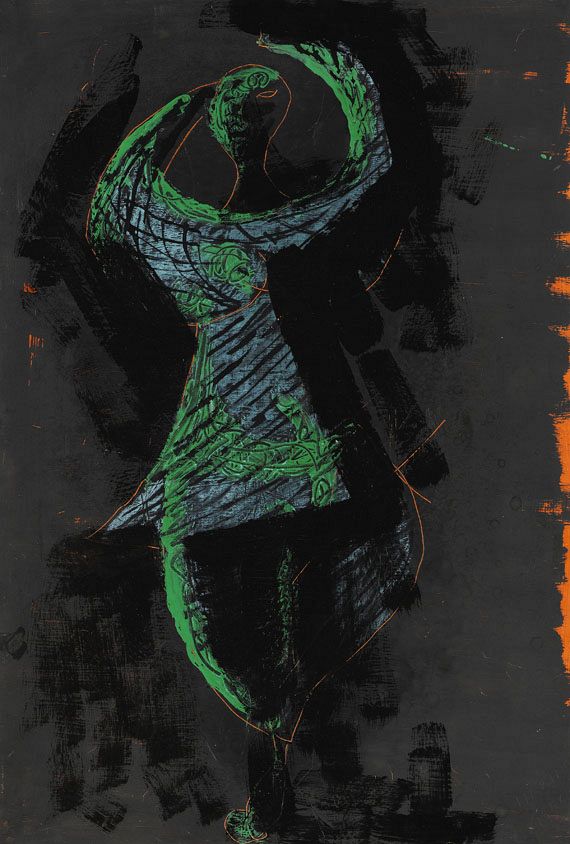 Accompanied by a photo confirmation regarding the work's inclusion into the forthcoming catalog raisonné under the number 660, compiled by Maria Teresa Tosi, Fondazione Marino Marini, Paris, dated 30 April, 2013.

PROVENANCE: Formerly private collection (acquired from Galleria Levi, Milan, in 1969. With gallery label on stretcher, there with inscription).

The Italian sculptor, painter and graphic artist Marino Marini enrolled at the Accademia di Belli Arti in Florence in 1917. The formative influences on him while he was still an art student were Greco-Roman antiquity, the International Gothic style and the early Renaissance. From 1928 the artist made several lengthy visits to Paris. Arturo Martini appointed him to the Villa Reale art school in Monza near Milan in 1929, where Marino Marini held the chair of sculpture for eleven years. The very same year the artist presented "Popolo", his first major terracotta sculpture. A large one-man show in Milan in 1932, participation in the Venice Biennale and in the Quadriennale in Rome, where he was awarded first prize for sculpture in 1935, were early milestones on Marini's road to public acclaim. In his figurative sculpture, which would come to be limited to a very few motifs, he strove for archaising simplicity of form which tended to the abstract. In 1941 Marini was appointed to the chair of sculpture at the Accademia di Brera in Milan. Two years later Marini fled the war to settle in the Ticino, where he met other leading exponents of contemporary sculpture.

Alberto Giacometti, Fritz Wotruba and Germaine Richier encouraged him in his ambitions and inspired his art. Marini left Switzerland in 1947 and returned to Milan, where he resumed his academic career at the Accademia. "Angelo della Città", a major work of Marini's soon followed. Meeting the American art dealer Curt Valentin a year later, led to a large one-man retrospective in New York as well as a number of other exhibitions which made Marini's work famous world-wide. In 1952 Marini was awarded the prestigious first prize for sculpture at the Venice Biennale. Two years later he was distinguished with the Grand Prize of the Accademia dei Lincei in Rome. These awards led to an array of exhibitions throughout Europe and two retrospectives on a lavish scale at the Kunsthaus in Zurich (1962) and the Palazzo Venezia in Rome (1966).

In 1968 Marini was honoured with yet another lofty distinction: the Pour le mérite for services to scholarship and art. A Marini museum was inaugurated in Florence in 1973 while the Centro di Documentatione dell'Opera di Marino Marini in the town hall at Pistoia documented the artist's life and work. The following year Marini died at Viareggio on 6 August 1980.