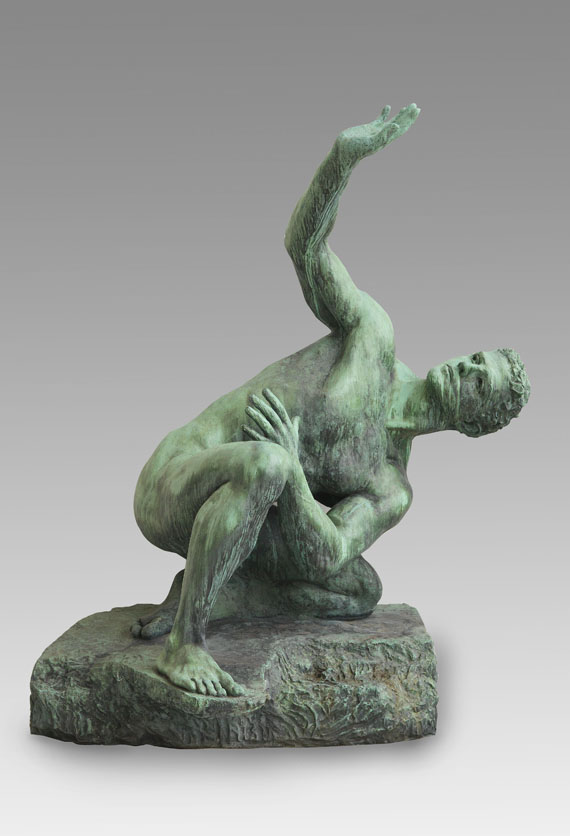 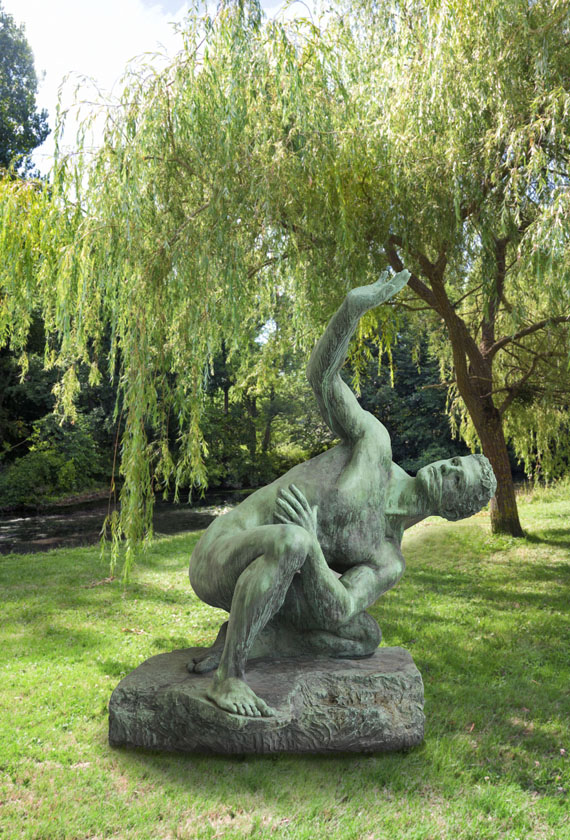 Max Klinger was one of the last great 'artist princes' of the late 19th and early 20th centuries. In 1874 Klinger began his studies at the Grand Ducal Baden Art School in Karlsruhe, continuing from 1875 at the Royal Academy of Art in Berlin under Karl Gussow. Klinger completed his studies with the evaluation 'exceptional' and a silver medal. At that time Klinger's role model as an artist was Adolph Menzel. In 1878 Klinger showed work for the first time publicly at the 52nd Academy Exhibition in Berlin. The following year Klinger became a pupil of Emile Charles Wauters' in Brussels. In 1880 he painted the 'Eva und die Zukunft (Opus III)' ['Eve and the Future (Opus III)'] cycle. A year later Max Klinger opened a studio in Berlin, where he soon became a member of the Berlin Artists' Association. In 1883 Klinger received his first large commission: to decorate the vestibule of Julius Albers' villa. That same year Klinger acquired a Paris studio and devoted himself to studying the work of Goya and Daumier in the Louvre but he was most attracted by the work of Puvis de Chavannes. On his return to Berlin, Klinger met Arnold Böcklin in 1887. Numerous trips to Italy, Brussels, Paris, Greece, London and Munich shaped the years that followed. In 1893 Klinger returned to his native Leipzig. Klinger grew successful, becoming a member of the Munich Academy. The Dresden Paintings Gallery became the first museum to buy one of his pictures ('Pietà') and he was appointed professor at the Royal Academy of the Graphic Arts in Leipzig and made a member of the newly founded Vienna Secession.

One year before the completion of the "Beethoven", this larger-than-life bronze of the "Athlete" is yet another masterpiece in Klinger's row of sculptures. The monumental kneeling "Athlete", bowing his torso and holding his arms in dramatic posture, is a prime example of the variety of influences Klinger worked up in his art. First of all, the "Athlete" is a beautiful model of a classic nude study, as it was common during the days of academic art studies. For the "Athlete" Lionel Strongfort, a professional athlete, sat model. With his clearly defined muscles he must have been the ideal of an athlete for Klinger. Just how intensive Klinger studied the human body is well observable in this sculpture. The long muscle strands of the well-proportioned body and the strong limbs as well as the man's well-balanced almost acrobatic posture invite the observer to view the sculpture from all sides. With its various levels of perspective, Klinger guides the eye of the observer not only to the overall composition, he also emphasizes details such as hands and feet, as well as the "Athletes" face that is surrounded by his curly hair. In many respects does the "Athlete" reference earlier sculptural models that Klinger transfers with his own style: On the one hand, ancient sculptures are an obvious source of influence, on the other hand, the art of Auguste Rodin is just likewise observable. His dynamic physical concept as well as the partial "non finito" approach have found their way into our sculpture. Not onlyin formal terms, but also in terms of expression, is the "Athlete" all in line with traditions of art history. Klinger ordered that a cast of this work should adorn his grave. Accordingly, Klinger's "Athlete" joins a prominent group of artists such as Michelangelo Buonarroti or Baccio Bandinelli, who also made sculptures for their own graves.

The idea of the Gesamtkunstwerk (total work of art) informed Klinger's aesthetic preoccupation with literature, sculpture, painting and drawing as well as his interest in music. The graphic arts also figure prominently in the work of this versatile and extremely prolific artist. Max Klinger promoted the artistic dialogue of his day by founding the Villa Romana and the Association of Annual Leipzig Exhibitions. The numerous distinctions Klinger was awarded (being made a Knight of the Pour le mérite order, an honorary member of the Stockholm Academy, etc) not only attest to his success but also indicate the seminal role Klinger played in introducing modern art to Germany. The work, stylistically a blend of Jugendstil and Symbolism, for which Klinger is chiefly remembered today includes dreamlike cycles of prints and sculpture, highly controversial during his lifetime, such as the 'Beethoven' monument. [KP].