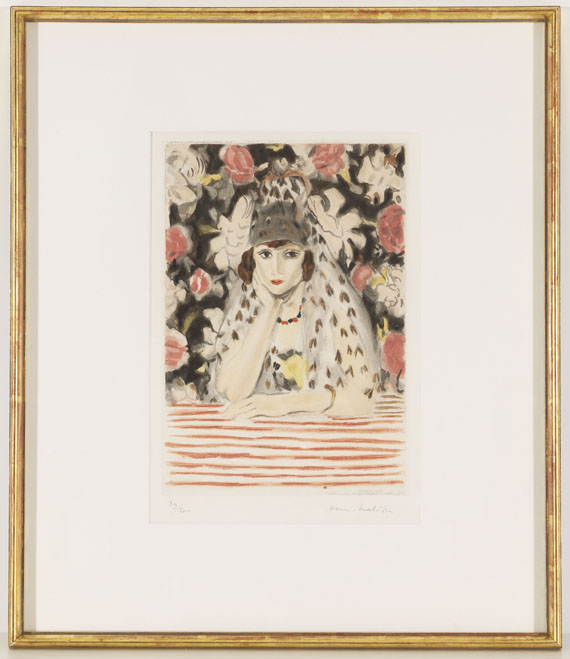 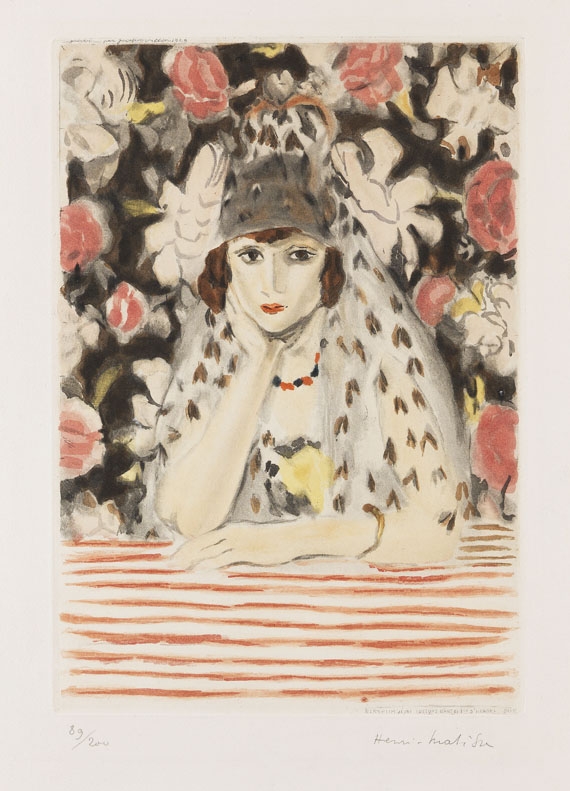 Matisse, one of the great reformers of European painting in the first half of the 20th century, studied law and graduated at the age of 21. He then began painting Impressionist and Pointillist paintings at the Académie Julian and then at the École des Beaux-Arts in Paris. His works are characterised by increasingly simplified forms and brilliant colors which he developed after studying neo-Impressionist ideas about color. The passionate colors of his works led to them being criticised as 'Fauves'(wild ones) at the Paris autumn Salon in 1905. Matisse thus became the main protagonist in a circle of young artists which also included Derain, Manguin and Rouault.

Color to Matisse was the pure means of creating an autonomous picture space. Figural motifs no longer possess their material function so that there is no impression of space. Two-dimensionally-decorative, arabesque-like elements dominate his interiors, still-lifes, nudes, portraits and landscapes. His oeuvre includes not only drawings, engravings, lithographs and linoleum cuts but also book illustrations, for example the poems by Stéphane Mallarmé or Beaudelaire's 'Les Fleurs du Mal'. A typical feature among Matisse's Oeuvre are the pictures made of cutout colored paper, some of which he also produced as lithographs. The artist's sculptures, small figural bronze statues, played an important role in the development of modern sculpture.

In 1908 Matisse founded his own school which particularly influenced German painters such as Purrmann or Levy. He spent the winters of 1911/12 and 1913/14 in Morocco, an experience which is reflected in the 1920s in his series of 'Odalisks'. From 1917 Matisse spent most of his time in Nice. His career reached a peak when he was commissioned to paint the interior and to design the stained-glass windows of the monastery chapel Notre-Dame du Rosaire in Vence near Nice which was dedicated in 1951. [KD].