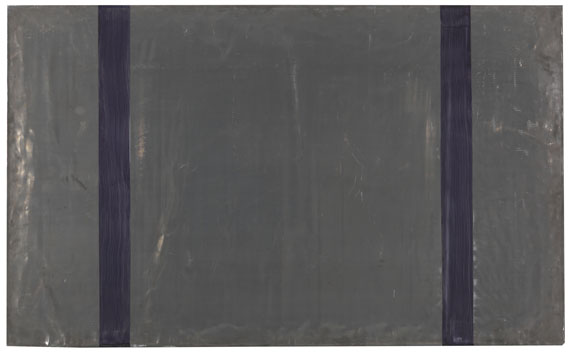 We are grateful to the Büro Günther Förg for his kind support in cataloging this lot.

Born in Füssen in 1952, the German painter, sculptor and photographer Günther Förg studied at the Akademie der Bildenden Künste in Munich under Karl Fred Dahmen from 1973 to 1979. The first single exhibition took place at the gallery Rüdiger Schöttle in Munich in 1980. Further exhibitions followed: in 1984 Förg took part in the exhibition "von hier aus" in Düsseldorf.

In 1992 his work could be seen at the documenta IX, followed by an exhibition at the Stedelijk Museum in Amsterdam in 1995. A teaching post took the artist to the ZKM in Karlsruhe in 1993 until he returned to Munich, where he also held a chair at the academy since 1998.Across all materials and media, Förg combined photography, painting and sculpture, which results in complex constructions. Thus Förg linked the aesthetics of large-format architectural Bauhaus photographs or depictions of deserted fascist building complexes to portrait photos or framed mirrors. In other arrangements Förg allowed reflections about art by vigorously confronting monochrome wall paintings with lead pictures. [KP].