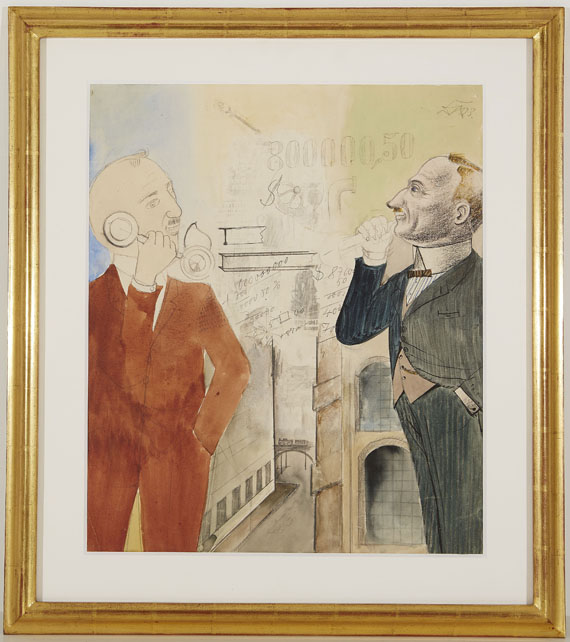 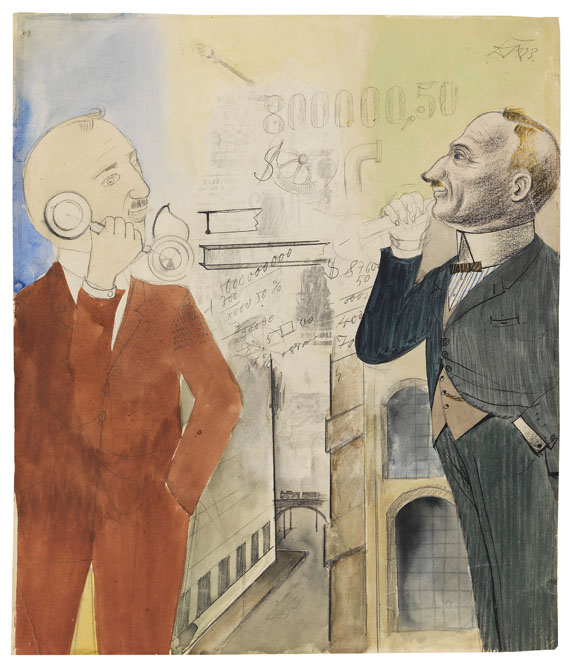 The socio-critical works from the 1920s are among the artist's most sought-after works on the international auction market.

Multiplying wealth without labor is the greatest diabolic fascination ofa rampant capitalism. The turbulent years after World War I, when the new democratic order was still in its infancy, saw an unexpected boom in speculationon goods and services. Fortunes were created overnight, just as savings were annihilated. A society in trance, still seeking its inner balance, was heading for an uncertain ending. Otto Dix, along with George Grosz, was one of the most important chroniclers of those days. The open criticism of a group that had no sense for the right measure was also present in his works. And how the times resemble one another: Even though means of communication may be more modern, the will to multiply wealth by means of speculation is still the same. Dix lets his stock market gamblers look like serious businessmen, which makes them even more dangerous. The sequences of numbers behind them are like writings on the wall, their mere presence hints at how much everything is at the mercy of speculation. The demonical possession with sex is accompanied by the demonical possession with money. Otto Dix hasvisualized both, and his circle of themesin the 1920s is almost focused entirely on them. He shows a society that is about fall apart, but he shows the factual side and does without malice.

After expressionistic and dadaistic beginnings Dix turned to the New Objectivity in 1922, moved to Berlin in 1925 and became the most distinguished portrait painter of the bohemia in Berlin and the intellectual society of the Weimar Republic. In 1927 he was appointed professor at the Dresden Akademie, but was dismissed again in 1933 and was finally no longer permitted to exhibit his works as an 'unwanted artist'. Dix then moved to Randegg near Singen and three years later to Hemmenhofen on Lake of Constance. In 1945 the artist was drafted into the 'Volkssturm' and was captured by the French in Colmar. After the war annual stays in Dresden, the membership at the academies in Berlin-Dahlem and East-Berlin led to a continuing shuttling over the frontier and between two state arts. Dix' trips to Southern France, Italy and Greece were enriched in 1962 by a study stay at the Villa Massimo in Rome and two years later by the membership of honour of the Accademia delle arte del disegno in Florence. Since 1950 there was a thematical and stylistic change in his late works, which led from the urban culture to bucolism, from the polemically realistic to the carefree-expressionistic. Dix was still interested in portraits, but religious subjects and landscapes also played a dominant role. Otto Dix is counted among the most important German artists of the 20th century. His work mirrors in its lively changeability the caesurae of the century, without abstraction, which was dismissed and criticised by Dix up to a great age. [KD].