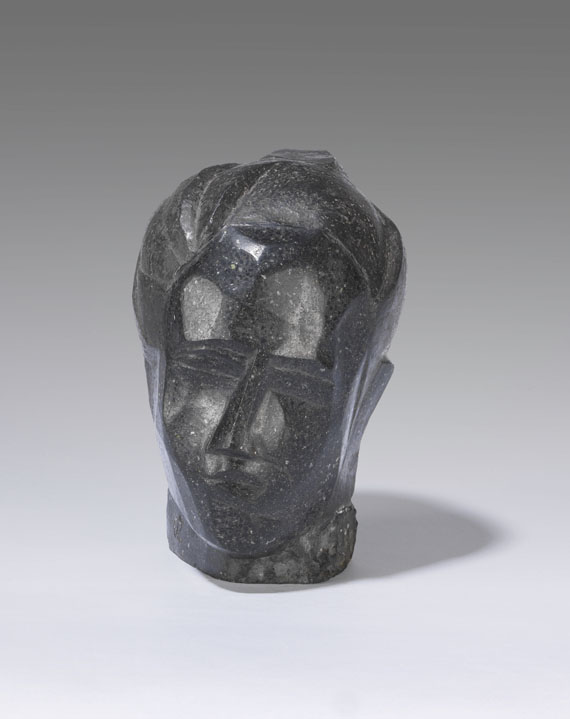 enlarge image
+
306
Ossip Zadkine
Tête de jeune fille, 1920.
Estimate:
€ 25,000 / $ 29,000
Sold:
€ 41,480 / $ 48.116
(incl. 22% surcharge)
Lot description
Tête de jeune fille. Um 1920.
Granulite sculpture.
Cf. Lecombre no. 82. With scratched monogram in lower left of neck. Underside of base with fragments of a customs label and with illegible adhesive note with inscriptions. 23,2 x 14,8 x 17,3 cm (9,1 x 5,8 x 6,8 in).
Ossip Zadkine made several replicas of his works, mostly in bronze. This work is very likely to be an artist's replica of the original version in marble, which has been in possession of the Musée de Grenoble since 1921. The granulite head must have been made shortly after the marble version and is the only known granulite version of this expressive Cubist work.

PROVENANCE: Galerie Heseler, Munich (there acquired from current owner in the 1960s).

Ossip Zadkine was born in Vitebsk, Belarus on 14 July 1890. In 1905 his parents sent him to his mother's northern English homeland. He called himself Joe Zadkine until 1914. After attending the polytechnic and the Central School of Arts and Crafts in London, the young artist went to Paris in 1909. There, he enrolled at the Ecole des Beaux-Arts which he quits again soon after in order to work as freelance artist. In 1911 he took part in the ‚Salon des Indépendants' for the first time and one year later joined the cubists. World war I left its traces in his person and his work. He found initial fame in Belgium and Holland, later in France, England, and America. Already during the 1920s retrospective exhibitions of his work took place. In 1942 he fled to the United States.

He worked in New York, Arizona and North Carolina. He only returned to the liberated Paris in 1945, and worked as lecturer at the Académie de la Grande Chaumière from 1946 to 1958. In 1950 he was awarded the first prize for sculpture at the Venice Biennale and in 1960 the ‚Grand Prix de la Sculpture' of the city of Paris. In the 1960s he reached the peak of his fame. His works travelled around the world in countless exhibitions and Zadkine worked at home on graphic series, monumental sculptures and book projects. Ossip Zadkine died in Paris on 25 November 1967.

Zadkine's early work was crucially inspired by Auguste Rodin as well as the cubists, who's principles he translated into sculpture. As of about 1920 he rejected cubist use of forms and acquired a softer style. The 1940s saw the characteristic erosions and perforations of his sculptures. 'Stadt ohne Herz' (Heartless City) of 1953 may be seen as his principal work, a memorial to the destruction and rebuilding of Rotterdam. Ossip Zadkine was married to the painter Valentine Prax (1899-1981) who, in 1978, bequeathed two of Zadkine's former studios as well as the main body of his works to the city of Paris as a basis for the foundation of a Zadkine-museum. [KD].