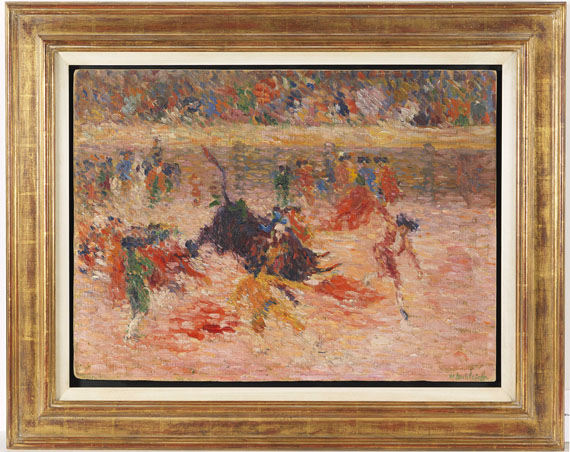 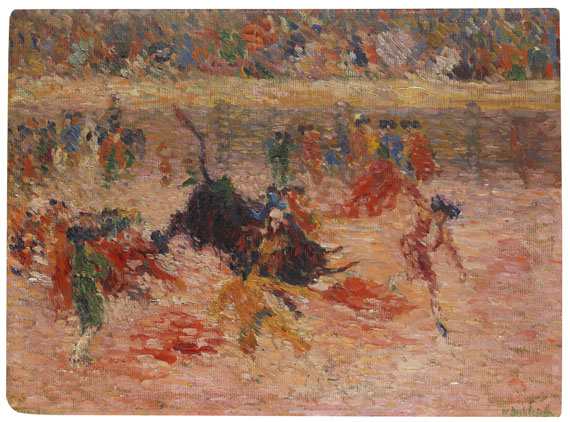 After completing his training at the Military Academy in Moscow, Vladimir Bechtejeff starts to study painting at the Moscow Academy of Arts in 1902. On the advice of Jawlensky, he moves to Munich in same year, where he continues his studies with Heinrich Knirr until 1905. From 1906 to 1909, Bechtejeff lives in Paris.

This painting, made before Bechteev's sojourn to Paris, is still under teh influence of late Impressionism. "It is theinternational late Impressionismand its comma techniquethat makes for the great coloristappeal of his earliest paintings[.]" (Klaus Lankheit, Zum Geleit, preface of catalog for exhibition "Vor 50 Jahren", Galerie Stangl, München 1962, no page). The work, experimentalfor both the choice of colors and the composition, shows an artist, who, influenced by vanguardtendencies of the late19th century, seeks his way intoModernism.Artistic reminiscences becomevisible, its scattered and fitful structure shows influence of both French late Impressionism as well as Vincent van Gogh, the late discovered artist, who was in particular focus during the years this painting was made. Similar to the Expressionists, who also attained their eventual style through theexamination of late Impressionism, Bechteevwould pursue a path in the following years that eventuallytook him to his own formalabstraction. Unlike it was the case with many his contemporaries, his style never neglectedits origins.

Returning to Munich, he joins the 'Neuen Künstlervereinigung München' in 1909, which he leaves again in 1912 in protest against a self-publicising attack by the group on abstract painting. Bechtejeff's works at this time, with their glowing use of color, are strongly influenced by Javlensky, whilst his shimmering lines are reminiscent of the works of Late Impressionism. Subsequently, he produces ornamentally flat compositions with an energetic color rhythm which nonetheless retain figurative references. With the start of the First World War, Bechtejeff's artistic development breaks off abruptly. He returns to Russia and is called up for military service immediately. After this, Bechtejeff works initially in the Moscow Commission for the Preservation of Historical Monuments, and then, in the years 1921/22, as a stage builder, later becoming Design Manager of the Moscow State Circus. In the 20s and 30s, he works mainly as an illustrator. In addition, he devotes himself in his later works to water colors and gouache, in addition to oil painting. Bechtejeff was accorded increasing recognition in his own country after the end of the Stalinist era.