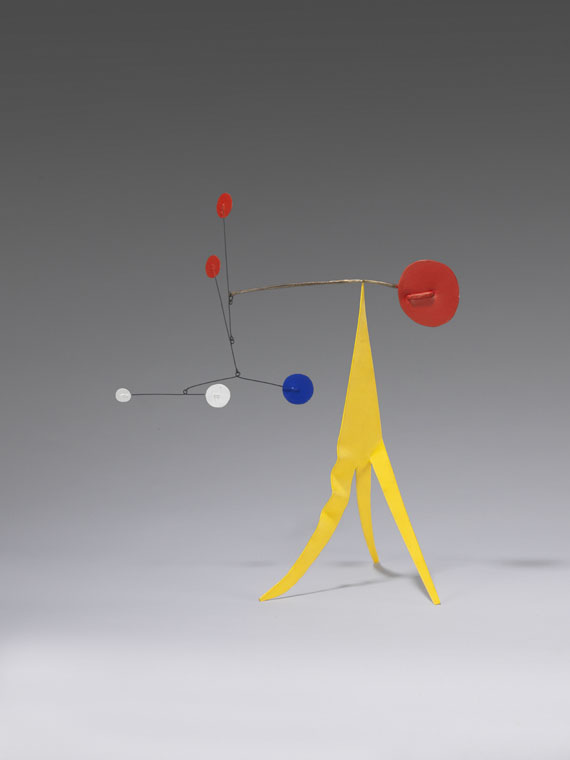 Calder's unique mobiles with their hovering colors and forms are regarded as the artist's most sought-after works on the international art market.

Other than specified in the catalog, this lot number may also be subject to differential taxation + 7% import turnover tax (savings of 5% in comparison with regular taxation).
The work is registered in the archive of the Calder Foundation, New York, under the number "A 05718".

Alexander Calder counts among the most distinguished US-American artist of the 20th century. He grew up in an artistic environment – his father was a sculptor and his mother a painter, however, their son initially decided to study engineering, earning his diploma in 1919. In 1923 Calder joined the New York Art Students League and took lessons in drawing. In 1925 Calder made his first steel wire sculptures, which would decisively coin his further course in art. Additionally, he made drawings that he showed together with his paintings in his first exhibition at The Artists Gallery in New York in 1926. The same year Calder began to work on his legendary "Cirque Calder", a permanently growing compilation of mechanic toys made of steel wire, rubber, leather and wood. Gradually, a complete miniature circus came into existence. At first he showed it only to a few select friends, but soon he called great attention with public presentations. After Calder had lived and successfully worked in Paris in 1926, with several acknowledged gallery shows, he again moved to the bustling art metropolis in 1930. The contact with Marcel Duchamp and Hans Arp was especially influential on Calder's artistic development. Duchamp named Alexander Calder's motor-driven, chattering sculptures "Mobiles", while Arp conceived the term "Stabiles" for the unmotorized objects a little later. It showed that both “Mobile“ and “Stabile“ would become core elements and essence of Calder's art. Calder himself increased the meaning of the term "Mobile" in the early 1940s, because he did not only refer to electric or mechanic impetuses, but any kind, including natural ones such as wind. In 1937 he eventually made "Whale" the first sculpture with which we associate the term "Stabile", for it is constructed of massive, immobile, black steel plates.

Calder made an ingenious step with the combination of “Mobile“ and “Stabile“ creating the so-called "Standing Mobiles", filigree color forms that balance on firm stands. It is not only through the three-dimensional perspective of the plastic but also because of the individual elements' free motion that Calder confronts the observer with an ever changing abstract composition, which, following the laws of gravity, is never out of balance. Different from George Rickey, another early protagonist of Kinetic aAt, Calder did not only integrate form and motion, but also the element color into his hovering compositions. Calder employs a color spectrum reduced to the non-colors black and white as well as the fundamental colors blue, yellow and red for his “Mobiles“. In some works he uses it just partly, seldom – as it is the case with this work from the early 1960s – he takes it up in its entirety. Calder's sensitive creations uniquely embody calmness and motion at the same time. Owed to their inimitable character, they did not only fascinate contemporary collectors like Peggy Guggenheim, but also the international art market, up until today.

In November 1976 Alexander Calder died in New York. Works by Calder are in possession of renowned international collections, such as the Tate Collection London, the Museum of Modern Art in New York or the Fondation Beyeler in Riehen near Basel, which recently began to show works by the artist in cooperation with the Calder Foundation in the so-called "Calder Gallery".