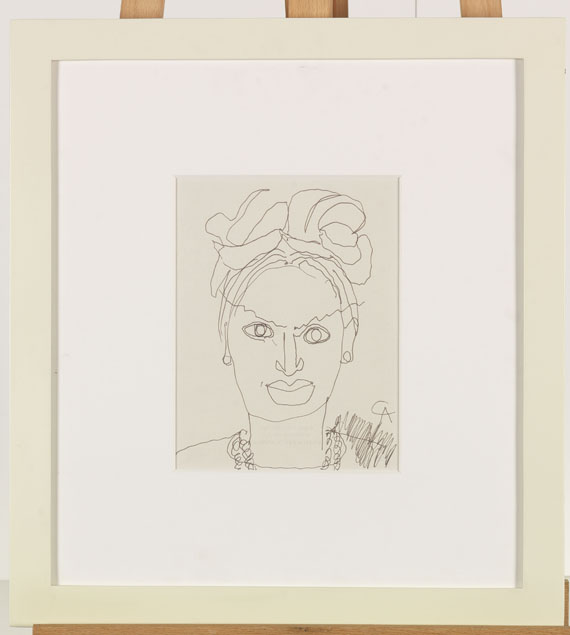 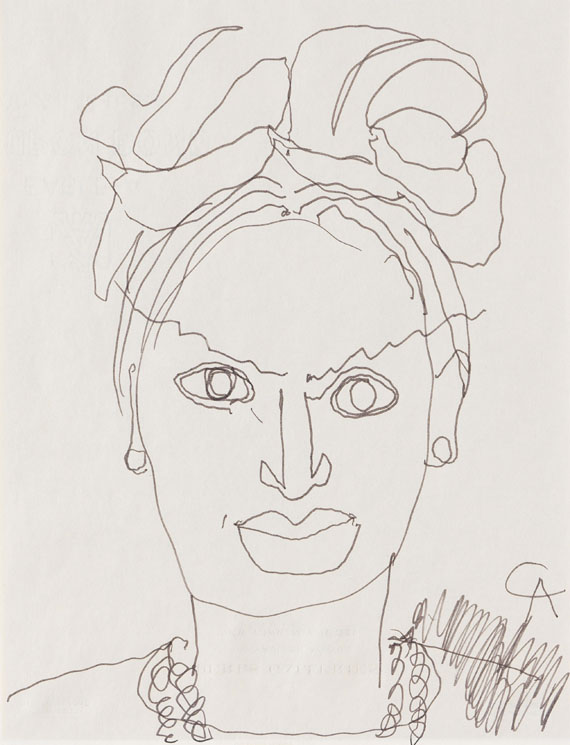 Other than specified in the catalog, this lot number may also be subject to differential taxation + 7% import turnover tax (savings of 5% in comparison with regular taxation).
The drawing is registrated in the archive of the Calder Foundation, New York, under No. „A 26582“.

Alexander Calder counts among the most distinguished US-American artist of the 20th century. He grew up in an artistic environment – his father was a sculptor and his mother a painter, however, their son initially decided to study engineering, earning his diploma in 1919. In 1923 Calder joined the New York Art Students League and took lessons in drawing. In 1925 Calder made his first steel wire sculptures, which would decisively coin his further course in art. Additionally, he made drawings that he showed together with his paintings in his first exhibition at The Artists Gallery in New York in 1926. The same year Calder began to work on his legendary "Cirque Calder", a permanently growing compilation of mechanic toys made of steel wire, rubber, leather and wood. Gradually, a complete miniature circus came into existence. At first he showed it only to a few select friends, but soon he called great attention with public presentations. After Calder had lived and successfully worked in Paris in 1926, with several acknowledged gallery shows, he again moved to the bustling art metropolis in 1930. The contact with Marcel Duchamp and Hans Arp was especially influential on Calder's artistic development. Duchamp named Alexander Calder's motor-driven, chattering sculptures "Mobiles", while Arp conceived the term "Stabiles" for the unmotorized objects a little later. It showed that both “Mobile“ and “Stabile“ would become core elements and essence of Calder's art. Calder himself increased the meaning of the term "Mobile" in the early 1940s, because he did not only refer to electric or mechanic impetuses, but any kind, including natural ones such as wind. In 1937 he eventually made "Whale" the first sculpture with which we associate the term "Stabile", for it is constructed of massive, immobile, black steel plates. In 1946 he went on his first trip to France after the war, in 1954 he settled in France for good again.

It is not only the bold look and the head's frontal direction, but also the massive chain and the large blossoms on top of the head as well as the eyebrows which Calder staged eccentrically, as they seem to charge beyond the head's contour like a flash of lightning.All of this suggests that this sheet is a portrait of the Mexican painter Frida Kahlo. Her characteristic appearance captured in a naive line with an extraordinary accuracy. It can be assumed that Alexander Calder met Frida Kahlo in context of her solo show at the gallery Julien Levy in New York in November 1938 or in 1939 at an exhibition in Paris.

In 1964/65 the New York Guggenheim Museum and the Musée National d'Art Moderne in Paris showed a retrospective. Additionally, Calder time and again made stage designs, mostly for theatersin Paris. He received numerous awards, for example the Grand Prize for Sculpting at the Venice Biennale or the Carnegie Prize in Pittsburgh. 1976 Alexander Calder died in New York. Works by Calder are in possession of renowned international collections, such as the Tate Collection London, the Museum of Modern Art in New York or the Fondation Beyeler in Riehen near Basel, which recently began to show works by the artist in cooperation with the Calder Foundation in the so-called "Calder Gallery".