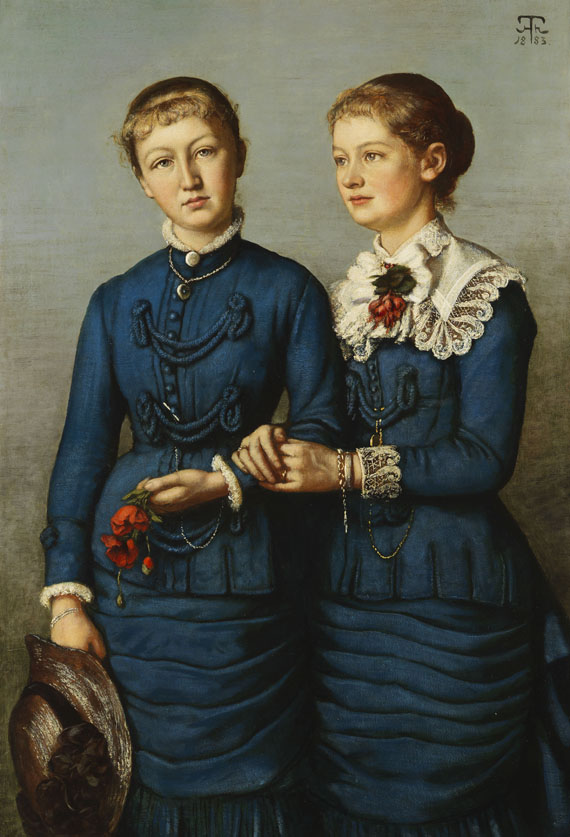 Hans Thoma spent his childhood in the village of Bernau in the Black Forrest. In 1853 he went to Basel, where he began an apprenticeship in lithography before switching to one in painting. Thoma received his first basic training in technique in 1855 at the hands of a painter of clock faces in Furtwangen, to whom he was briefly apprenticed. That same year he returned to Bernau to paint landscapes in small formats and portraits, for which he was paid only a pittance. After this training, such as it was, Thoma was admitted to the Karlruhe Art Academy in 1859, where his teachers were Descourdes, Schirmer and Canon. Thoma left the academy at the end of 1866 and went to Düsseldorf. There he met Otto Scholderer and went with him to Paris for several weeks in May 1868. Under Courbet's influence, he returned to Germany to paint pictures of figures and landscapes. In 1870 Thoma moved to Munich. He had a host of artist friends, including Victor Müller, Wilhelm Leibl and Arnold Böcklin. He also met Dr. Eiser, a physician from Frankfurt who would become his most important patron and promoter. In 1874 Thoma went to Italy for the first time and became acquainted with Hans von Marées in Rome. On his return to Munich, Thoma married Cella Barteneder, who had been his pupil, and moved to Frankfurt, remaining there until 1899. During this period he went to Italy again and to England to visit Charles Minoprio, another patron of his. In 1882 Thoma received his first major commission, to paint five frescoes with scenes from Wagnerian operas in the house of the architect Simon Ravenstein in Frankfurt. While there, Thoma made the acquaintance of Henry Thode, Richard Wagner's son-in-law, with whom he remained friends for the rest of his life.

In 1890 the first successful exhibition was mounted by the Munich Kunstverein and Thoma joined the Munich Secession. In 1899 Thoma was made director of a gallery in Karlsruhe and was appointed professor at the art academy there. In the years that followed he received many honours, including an honorary doctorate from Heidelberg University and 1917 the 'Pour le Mérite'. On his seventieth birthday, the Hans Thoma Museum was opened as an annexe of the Karlsruhe Kunsthalle. In addition, there were numerous special exhibitions, including one mounted by Fritz Gurlitt in Berlin. In 1919 Hans Thoma retired from his post as director of the Karlsruhe Kunsthalle. He died in Karlsruhe on 7 November 1924. [CB].