The paintings from the 1910s, predominantly those in which Pechstein captured his first wife and preferred model Lotte with an expressionist stroke of the brush, are among the most sought-after works by the artist on the international auction market.

Max Pechstein's artistic talent was discovered and encouraged at a very early age. His conventional career, first as an apprentice with a Zwickau painting master, then at the Dresden Kunstgewerbeschule and finally at the Dresden Akademie under the decorative painter Otto Gußmann, provided Pechstein with a sound craftsmanship. His ceiling painting at the Dresden Arts and Crafts Exhibition in 1906, with such an unconventional color scheme that the organisers had it sprayed with grey paint to soften the colors, attracted Erich Heckel's attention. He then invited Pechstein to join the artist group ,Die Brücke' which had been founded the year before in opposition to Impressionism. The group's aim was to "attract all revolutionary and restless forces" (Schmidt-Rottluff) and an emphasis of the power of color in painting. In this environment Pechstein's Expressionist style developed further, concentrating on elaborating the focal point of the painting with a sparse painting technique. Pechstein moved to Berlin in 1908 and became a co-founder of the ,Neue Sezession'. He painted figures, still lifes and landscapes in a moderately Expressionist style. Perhaps it was this, which lead to the artist's early and continuing success.

On his search for a suitable nude model Max Pechstein met Charlotte Kaprolat in 1909. She became his preferred model and his later wife. To him her voluptuous body was the epitome of a sensuality, which the painter wanted to interpretaround the turn of the century. In doing so Max Pechstein took on a perspective that he shared with surrounding circle of artists, however, in his very own sense and with his means. The seated young lady in"Die chinesische Jacke" is his wife Lotte. It is owed to the intimacy between painter and model and at the same time partner, thatMax Pechstein realized a familiar domestic scene that calls reminiscence of 19th century genre paintings. Slight melancholia is expressed by both the mien as well as in posture, an atmospheric value that Max Pechstein often employed as central theme. Contrary to the formal-abstract tendencies of the years after World War I, Pechstein focused entirely on the situation of the depicted person, which, in her slightly weary demeanor seems rather dreamy than present. The contrast of the complementary colors blue and yellow, which plays a great role in Max Pechstein's paintings, is moderated by the shade of green changing to yellow. But yet, the striking arrangement in terms of colors dominates the entire composition. The easy conciseness of the stroke of the brush is characteristic of paintings Pechstein made in those days.

From 1945 Pechstein taught at the Berlin Akademie der Künste. Before that time, during the Third Reich, he was slandered as a "degenerate" artist. Apart from paintings his oeuvre includes more than 850 woodcuts, lithographs and engravings. 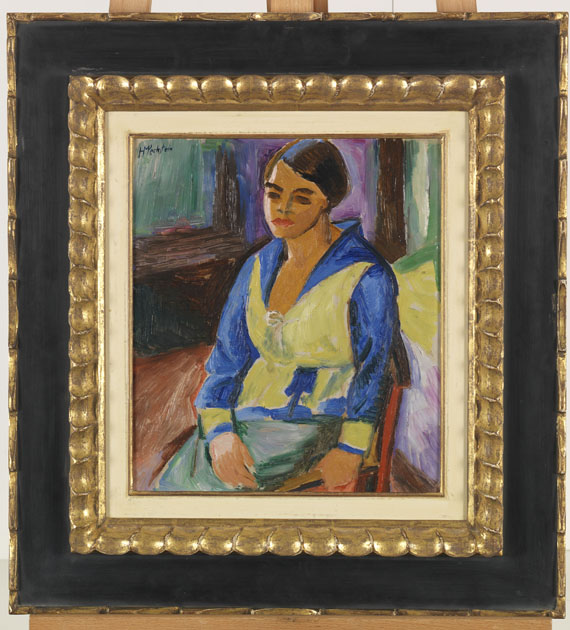