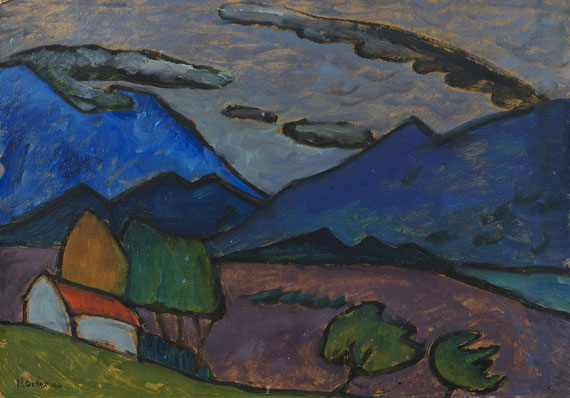 The work has been submitted for attention to the Gabriele Münter- and Johannes Eichner Foundation, Munich. The confirmation is not available up to date.

Collecting folksy reverse glass paintings and the connected occupation with a style focused on contours, had a liberating effect on Gabriele Münter'spainting style. She left a period of late Impressionist tone painting behind her, also under the influence of Wassily Kandinsky, and chose the clearly contoured form as carrier of the color. It is not the outmost differentiate color degrees that characterized her works from that point on, but the expressive value of compact forms. This decisive step into a new period of her creation became manifest during her first years in Murnau as of 1908. Gabriele Münter consistently pursued her style and even adhered to it during the difficult 1930s and 1940s. From the three great topic fields that characterized Münter's creation- landscape, still life and portrait – it is the first that best allowed her to realize her ideas. This is where the artist made a great contribution to Modern Art in Germany.

Münter was a member of the 'Neue Künstlervereinigung München' for two years and in 1911 she joined the 'Blaue Reiter', the artist group founded by Kandinsky and Marc. She was interested in Kandinsky's development towards abstract art, but her own works continued to be figurative. Her landscapes, figurative scenes and portraits show a reduction to the essential with an inclination towards humorous characterisation. When war broke out, Münter and Kandinsky at first moved to Switzerland. Münter, however, decided a year later to go to Stockholm, where she separated from Kandinsky. In late autumn 1917 she moved to Copenhagen. She travelled a lot during the 1920s and spent some time in Munich, Murnau, Cologne and Berlin. After 1931 she spent most of her time in Murnau and Munich. In 1956 she received the Culture Prize of the City of Munich. The year 1960 saw the first exhibition of Münter's work in the US, followed in 1961 by a large show in the Mannheim Kunsthalle. The artist died in her house at Murnau on 19 May 1962.