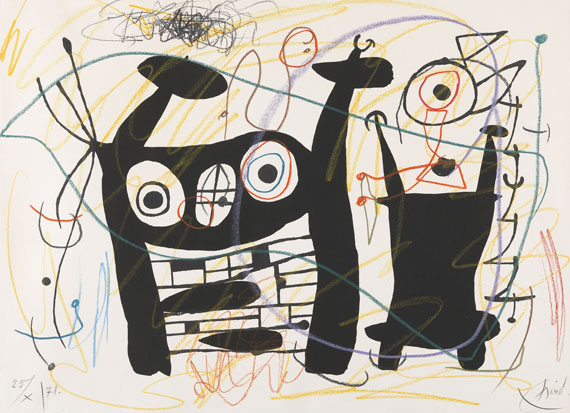 Between 1907 and 1910 Joan Miró attended both the Barcelona commercial college and the ‚Escuola de Bellas Artes de La Longa'. At first he worked as book-keeper. But as early as 1912 he enroled at the Academia Gali. He left there after three years in order to work as freelance artist. In the following years Miró was greatly influenced by the Fauves and the French cubists and in 1918 his first solo exhibition took place at the Galerie Dalmau in Barcelona. The following year saw his first trip to Paris where he met Pablo Picasso. This initial meeting developed into a close friendship. Shortly after, in 1921, Miró moved to Paris and was introduced to the surrealistc circle around André Breton. During this time - taking his cue from the ‚dessins automatiques' - he produced wide spatial compositions, playfully abstracting invented symbols. Various exhibitions in Paris, New York, and Brussels followed. Increasingly, Miró now dedicated himself to collages and from it developed the so-called material painting. The political situation in Spain and the outbreak of the Spanish civil war caused the artist to design numerous political posters. In 1937 he did the large mural ‚Der Schnitter' for the Spanish pavilion at the Paris world fair. After several years in Normandy, Miró returned to Barcelona in 1940 and settled in Mallorca. In 1941 the Museum of Modern Art devoted an extensive retrospective to him. In the following years he mainly produced sculptural works, mostly ceramics. 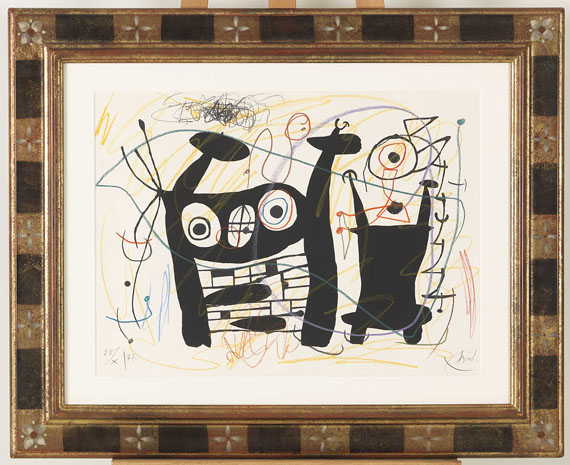