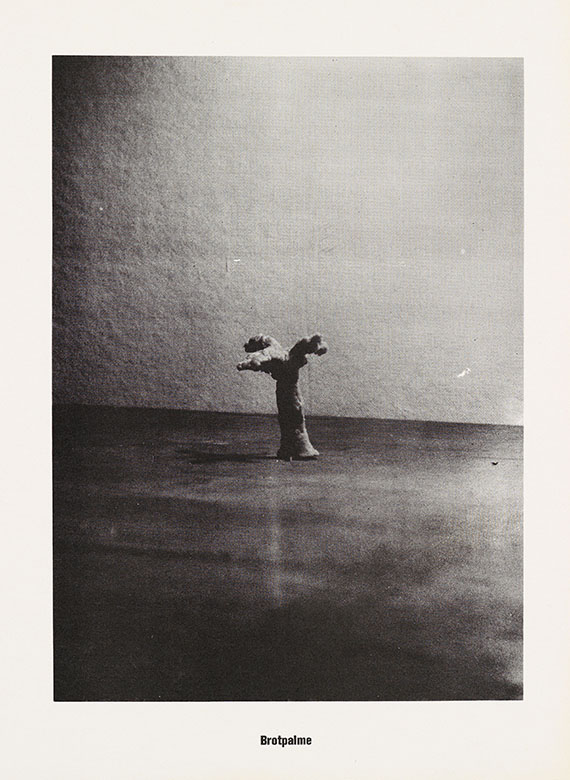 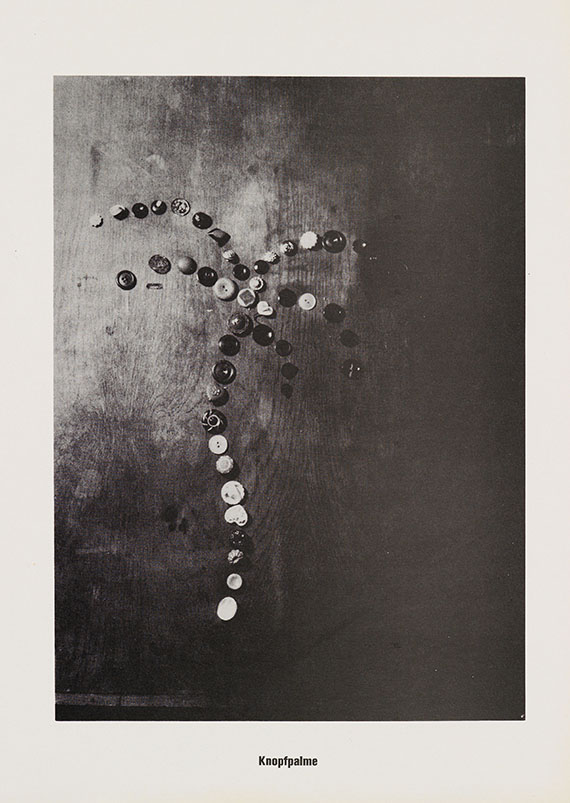 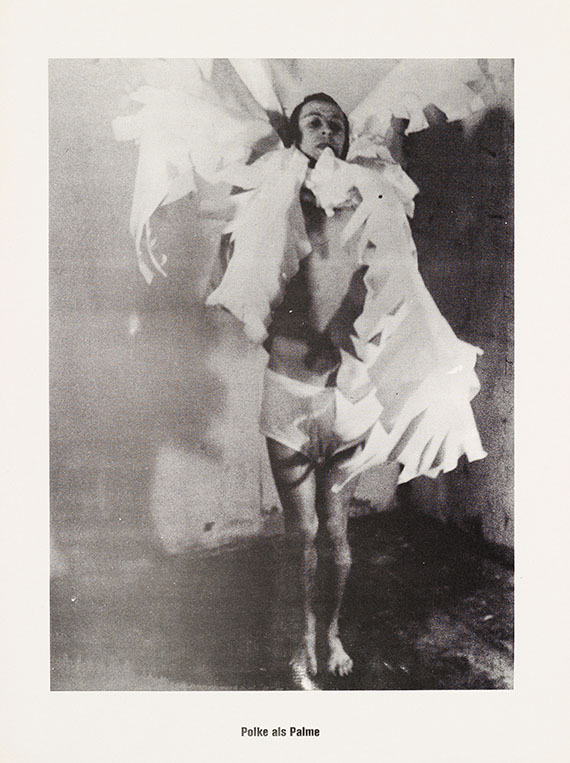 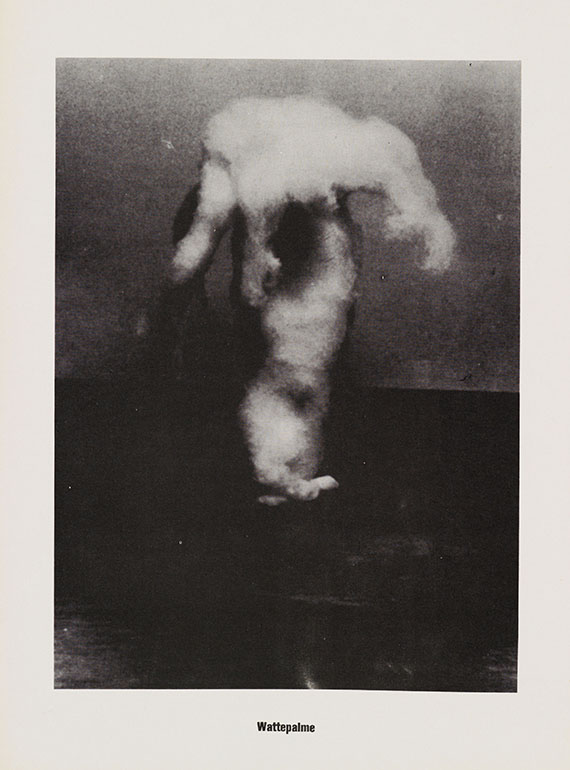 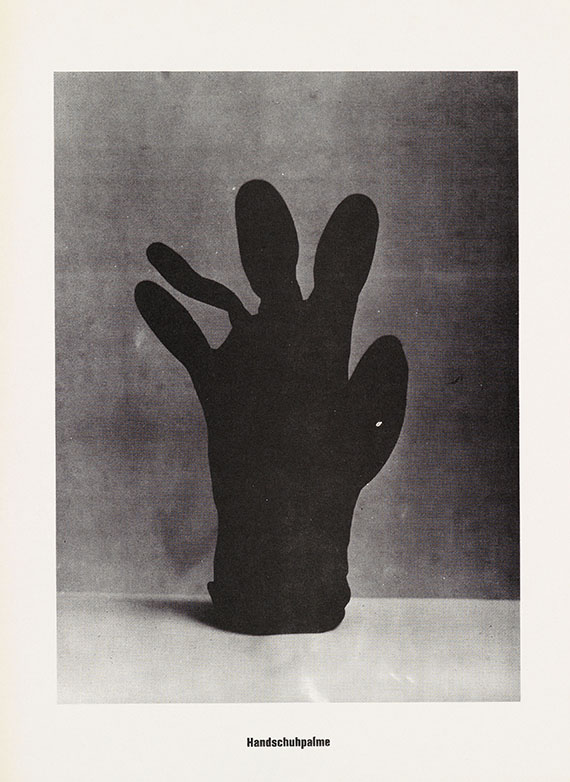 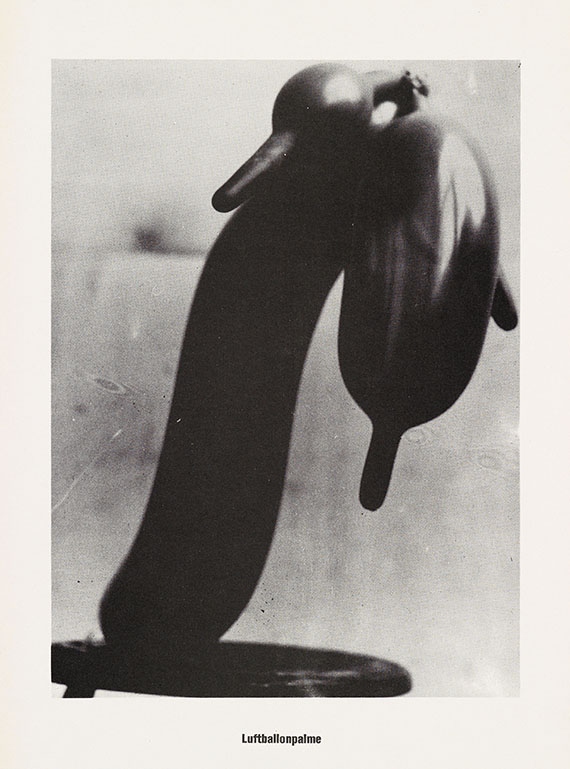 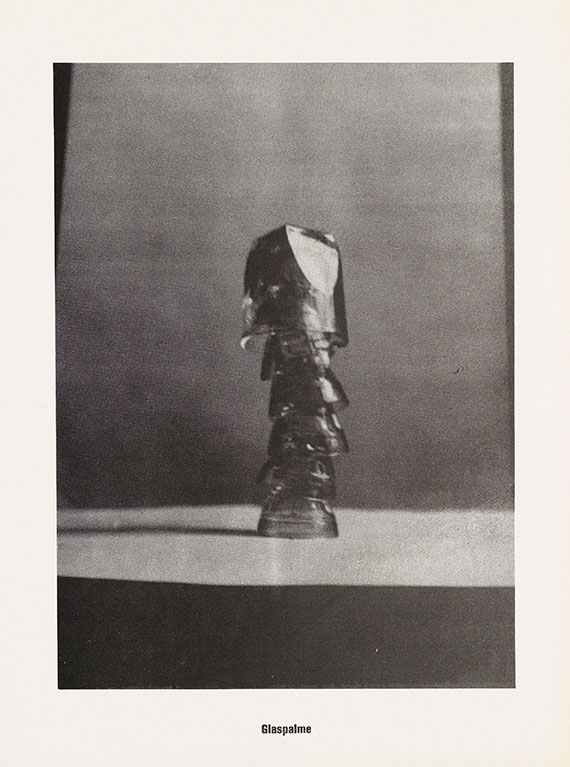 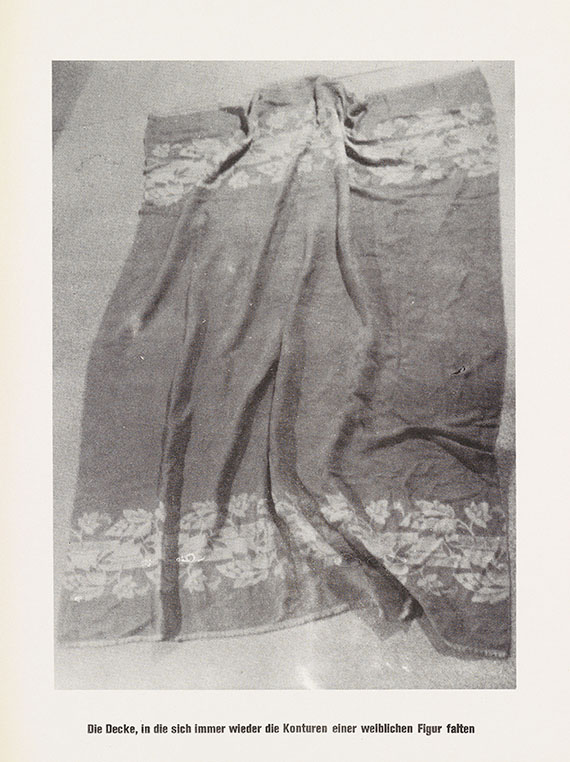 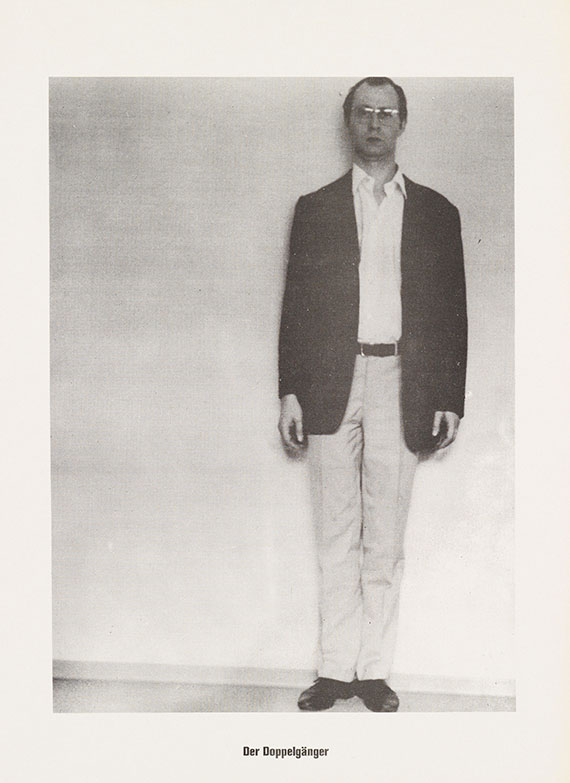 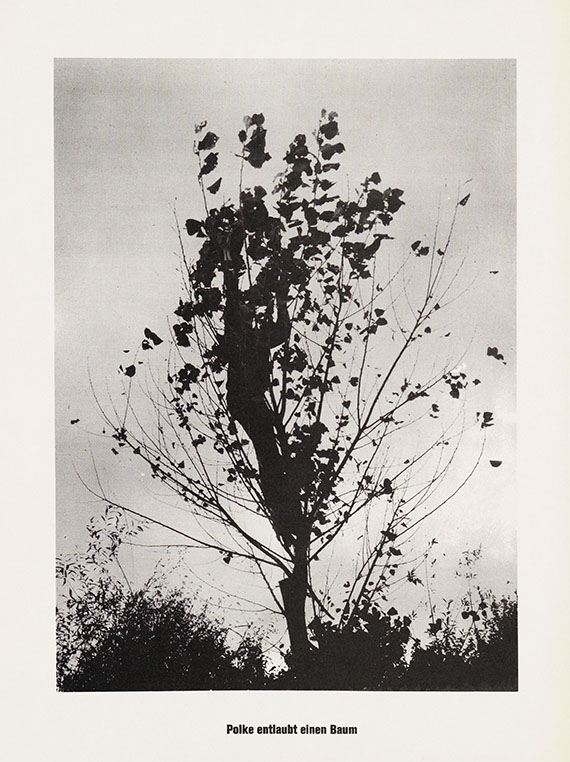 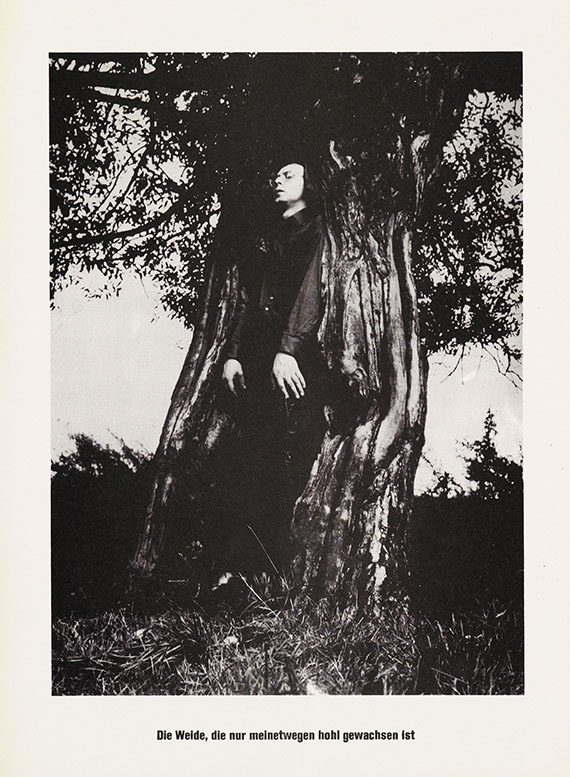 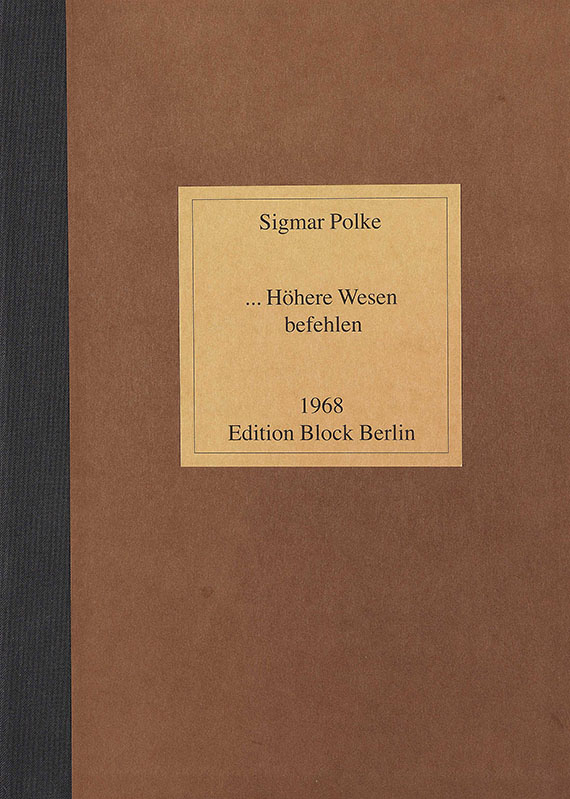 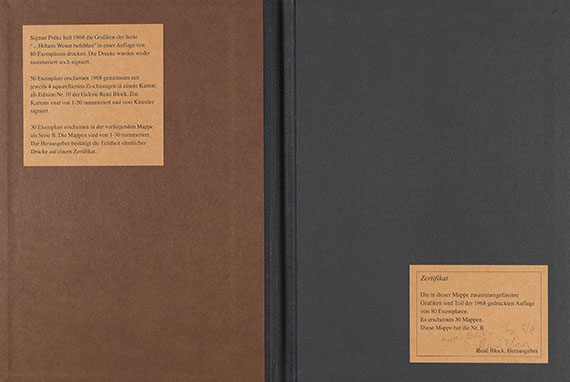 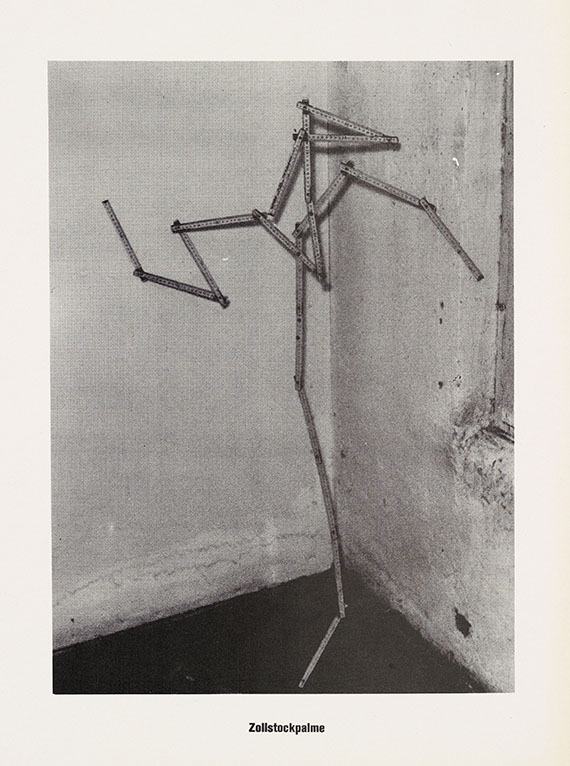 840
Sigmar Polke
Höhere Wesen befehlen, 1968.
Offset
Estimate:
€ 15,000 / $ 17,400
Sold:
€ 26,250 / $ 30.449
(incl. 25% surcharge)
Höhere Wesen befehlen. 1968.
The portfolio comprising 14 Offset prints, made after photographs by Sigmar Polke and Chris Kohlhöfer, additionally with text leaf and table of contents as wll as imprint on portfolio's pastedowns. Published by Galerie René Block, Berlin 1968.
Becker/Von der Osten 8. Signed, numbered and inscribed by publisher on certficte label. Each leaf typographically titled in lower margin. One of 8 HC copies aside from the edition of 30 from series B. On smooth wove paper. Each ca. 29,5 x 21 cm (11,6 x 8,2 in), size of sheet.
Photographs made between 1966 and 1968. Loose sheets in original half cloth portfolio with title label. The complete set. [SM].

Born in Oels, Silesia, in 1941, Sigmar Polke moved in 1953 from Thuringia to Düsseldorf, where he embarked on an apprenticeship as a glass-painter in 1959. He spent the years 1961-1967 studying at the Düsseldorf Art Academy under Gerhard Hoehme and Karl Otto Götz and met with Gerhard Richter. In 1963 Polke and Richter joined forces with Konrad Fischer-Lueg and Manfred Kuttner to mount an exhibition entitled 'Eine Demonstration für den kapitalistischen Realismus' ['A Demonstration for Capitalist Realism']. The exhibits were notable for the ironical treatment of consumer product and the critical use made of everyday clichés. Wit and irony are the hallmarks of Polke's work, even in its early stages, most noticeably so when he stagily features socks, sausages or interchangeable advertising from travel brochures. The first grid and strip pictures as well as paintings on decorating fabrics emerged.

In 1966 the artist was awarded the Young Art Prize and had his first one-man show. During the 1970s he travelled extensively, concentrating heavily on photography as a medium. Both in it and in painting his work often has an experimental flavour, with coincidence figuring prominently and autonomous chemical processes having discernibly taken place. In 1972 Polke showed work for the first time at a documenta. In 1977 he became an instructor and in 1991 a professor at the Hochschule für Bildende Künste in Hamburg. He regularly shows work at exhibitions in Germany and abroad and the largest retrospective of his work to date took place in 1997 at the Federal Art and Exhibition Hall in Bonn and at the Galerie der Gegenwart, Hamburger Bahnhof in Berlin.