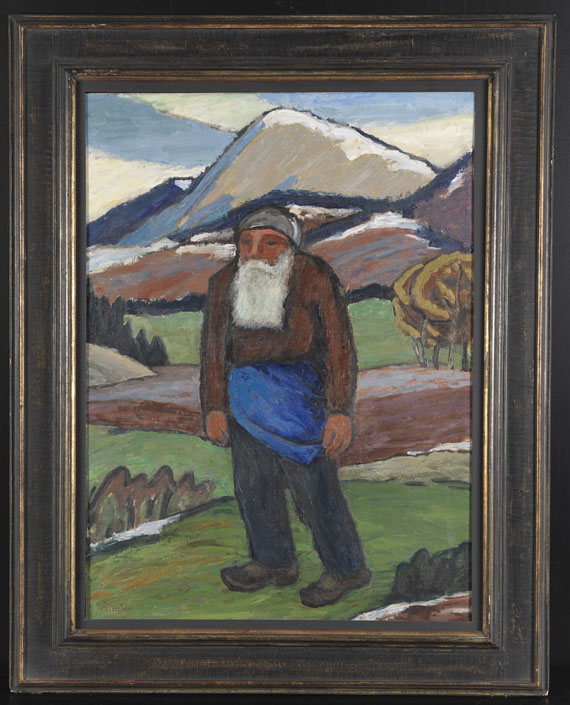 In the years following the separation from Vassily Kandinsky, Gabriele Münter sought new orientation and rediscovered the roots of her artistic activities. Inspired by the Bavarian mountain landscapes that surrounded her, she created new references to the scarce rural life, however, without falling for cliches like the yodeling Bavarian in Lederhosen. Her sensitive portraits of a harsh landscape and its people deliver proof of the love she felt for her adopted home, a place she would remain true to until the end of her life. The mountain farmer who lives of his scarce harvest, whom Gabriele Münter depicted here in the landscape in an unusually large scope, expresses, particularly for his closed posture, a kind of remoteness from the world which was characteristic of some mountain regions in those days. The observer's eye is all on the peasant, and reminiscence to works by Paula Modersohn-Becker is called, as she had attained similar means of artistic expression, however, a lot earlier and in other surroundings. Gabriele Münter hardly pursued such sensitive subjects in her later period of creation any longer, accordingly, this work is a document of her quest for new ways of expression which would decisively coin her following creation.
More Information
+
Sell
Get a free appraisal for a similar object!
+
Register for
Gabriele Münter
+
Buying from A-Z
+
Contact a specialist
+
Gabriele Münter Biography
Share