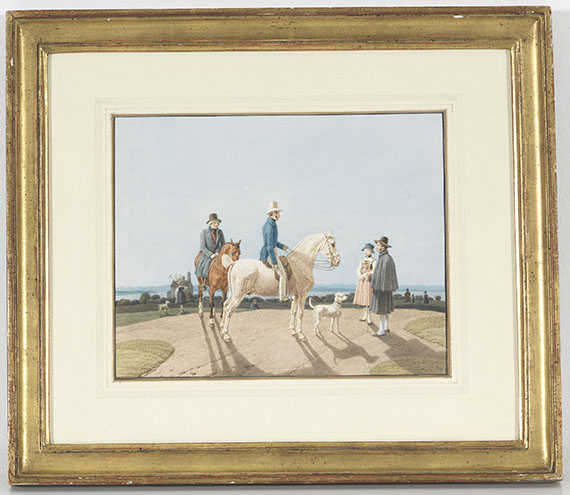 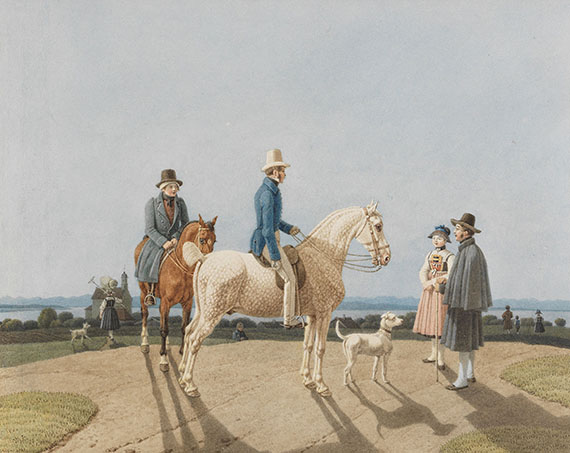 After years of painting battle scenes, Kobell turned to a new image type in the 1820s and 1830s, which is generally described as "plei-air portrait" or "encounter picture". In these pictures he depicts elegant gentlemen and ladies, often mounted on a horse, huntsmen, peasants and children in front of the Munich city silhouette or on Upper Bavarian lakes, as it is the case with this watercolor. With St. Jacobs church in Schondorff, erected in 1150, in left middle distance it shows a view over the Ammersee up to the foothills of the Bavarian Alps. Kobell describes a rural idyl, a happy country life after all the previous years had been coined by war and revolution. Generally, these works already hint at the landscape art concept of early Biedermeier. Naturally, Kobell made use of his vast knowledge of horse painting and the multi-figure battle scenes, however, he composed calm and contemplative encounters of just a few people and animals. Kobell uses the shadows of the isolated persons as a subtle connective element. Just as it was the case with the battle scenes, Kobell also prepared these pictures in numerous studies and sketches and uses single elements in new combinations for several compositions.
More Information
+
Sell
Get a free appraisal for a similar object!
+
Register for
Wilhelm von Kobell
+
Buying from A-Z
+
Contact a specialist
Share