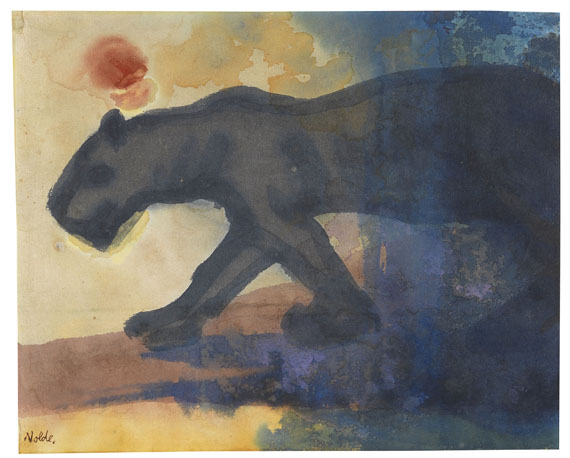 Impressive rare animal motif.
Accompanied by a written expertise issued by Prof. Dr. Manfred Reuther from 27 May, 2015. The watercolor is registered at the Ada and Emil Nolde Foundation, Seebüll.

Essay
In his typical manner, Emil Nolde transfers a rather unusual subject into an almost dramatic scene. The panther, emerging from the dark, shows all the mysteries characteristic of the big cat. Nolde decided to make an unusual composition, showing just two thirds of its stretched body. The panther emerging from the dark, which Nolde rendered here in a shadowy blue tone, is the mysterious narrative element of this work, which resembles the flower and landscape watercolors as far as the pictorial statement is concerned. Especially as their dark and glowing coloring conjures up the same magical and dramatic atmosphere. Emil Nolde made a number of watercolors after studies he had made in the Berlin Zoo in winter 1923/24 , it is very likely that our watercolor references these works, however, it goes far beyond a mere study, as it is subject to a clear pictorial composition that Emil Nolde regarded as essential for all his artistic creation.
More Information
+
Sell
Would you like to sell a similar object?
+
Register for
Emil Nolde
+
Buying from A-Z
+
Contact a specialist
+
Emil Nolde Biography
Share