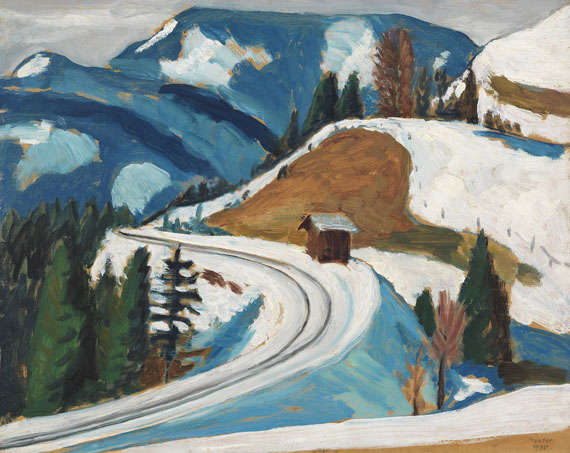 Essay
The landscape of the Ammergau mountains, which Gabriele Münter found right in front of her doorstep, inspired her to ever new atmospheric landscapes. Bold and experimental in design and coloring during her early period and with a stronger feel for reality later on as a result of her new concept of interpretation. Münter's depictions are statements of her love for the landscape: She avoids any kind of heroic notion as it is often ascribed to mountain landscapes. She sort of rounds the mountains and thus allows a peaceful atmosphere. In large and swiftly painted color fields, preferrably in Münter's beloved blue, she renders her view of a calm lower Alps landscape, in which a small wooden house makes for the focal point.
More Information
+
Sell
Would you like to sell a similar object?
+
Register for
Gabriele Münter
+
Buying from A-Z
+
Contact a specialist
+
Gabriele Münter Biography
Share