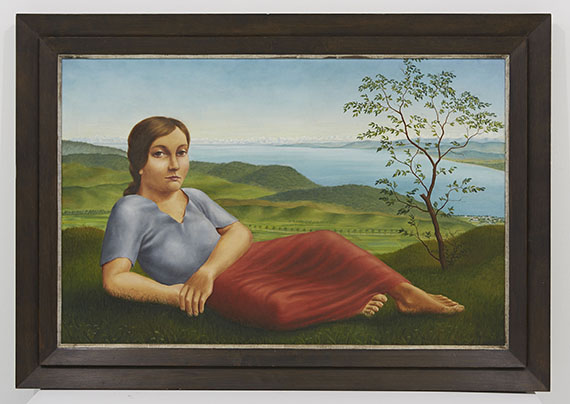 People in Georg Schrimpf's works seem to be in a sort of dream world. Their connection with reality is only pretended. As isolated as Schrimpf embeds his figures into the surroundings, as introvert and mysterious is their charisma. It is a very special atmosphere that Georg Schrimpf brings to life in his works. He said about this: "As far as kind and character of my art is concerned, I can only say one thing: My art is in no way subject to any program whatsoever. Everything I want to achieve with my pictures is solely dedicated to life; the way it goes despite all coincidence. I strive for simplicity and clarity as fundamental features, believing to find the inner value of things." (Quote after: Wolfgang Storch, Georg Schrimpf - Maria Uhden, Berlin 1985, p. 162). The iconography of reclined people in a landscape goes back to Renaissance, initially with a notion of mythology, later with an erotic notion. Schrimpf, however, brings out what moves his figures deep inside in a simple and natural posture. The landscape is just a means of intention. Lake and mountain rest like the figures do, only the small tree with its fine branches suggests renewal and change
More Information
+
Sell
Get a free appraisal for a similar object!
+
Register for
Georg Schrimpf
+
Buying from A-Z
+
Contact a specialist
+
Georg Schrimpf Biography
Share