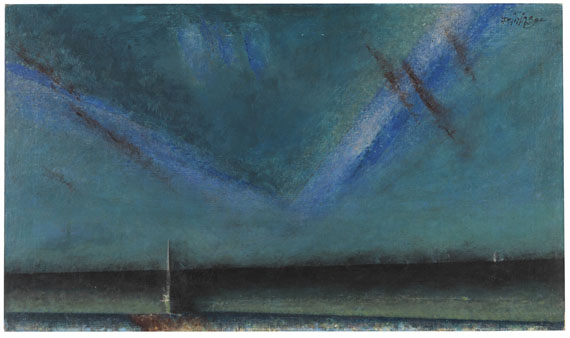 Essay
"Clear forms, which carry the space element andthe subject in all simplicity and directness-that in a new way, is what it makes Turner's art so great andlasting" wrote Lyonel Feininger to his son Lux in a letter from2 July,1946 (quote after: Ulrich Luckhardt, Lyonel Feininger, Munich 1989, p. 158).
In reminiscence of happy days Lyonel Feininger spent with his wife Julia at the Baltic Sea, the much-depicted theme is celebrated from memory in this work. The land-locked Baltic Sea differs from the open oceans through the variety of her shores and the pure beauty of her coasts. Lyonel Feininger discovered the sea's reserved charm at an early point, its illustration has led to some of his most mature works. Influenced by German Romanticism, to which the American of German origin felt very close, paintings with this subject break any visual boundary. Sky and sea form a unity and strive to be perceived in their painterly interpretation. The sea's mystic vastness under a high sky had alreday been used by Caspar David Friedrich for his famous painting "Der Monch am Meer" (The Monk by the Sea ). Feininger both expands and delimitates the theme through the magic of a silence that can be felt in the solitude at the Baltic Sea. But in Feininger's work it no longer is the solitary man on the beach and his quest for the meaning of life. A lonely sail that breaks the silence of loneliness without any visual presence serves as a subtle signal of civilization. Its optical answer resonances in the vastness. Feininger's talent in capturing the space's mythical character and to let it dissolve into infinity emphasizes the magical value of his works even more.
More Information
+
Sell
Would you like to sell a similar object?
+
Register for
Lyonel Feininger
+
Buying from A-Z
+
Contact a specialist
+
Lyonel Feininger Biography
Share