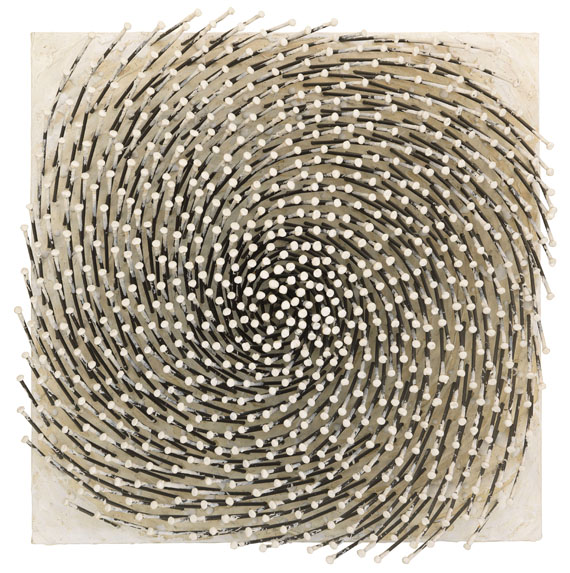 Accompanied by a photo expertise by the artist.

Essay
The spiral became part of Uecker's image repertoire as early as in the mid 1960s. Time and again the artist made variations of the motif, both in nail pictures as well as in print art, and found ever new interpretations of it. In our work Uecker placed the nails in a compact serial arrangement and lets them protrude over the edge of the white-primed image carrier, in order to suggest dynamic movement. Only the nails' heads are white, so that the raw shafts make for a clear contrast with the light priming, increasing the work's plasticity through the play of light and shade. It is this very stylistic device, as well as the observer’sperspective and the light incidence that allow Uecker's seemingly aggressively hammered and nailed image carriers to appear as highly aesthetic works with a both sensitive and powerful expression.
More Information
+
Sell
Would you like to sell a similar object?
+
Register for
Günther Uecker
+
Buying from A-Z
+
Contact a specialist
+
Günther Uecker Biography
Share