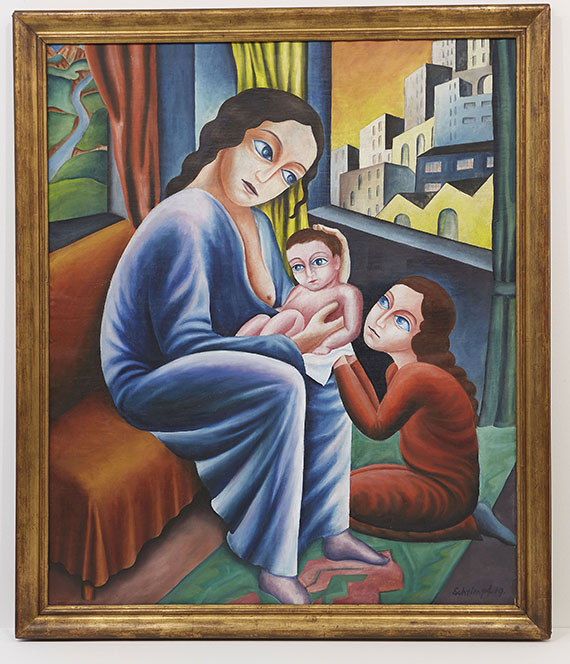 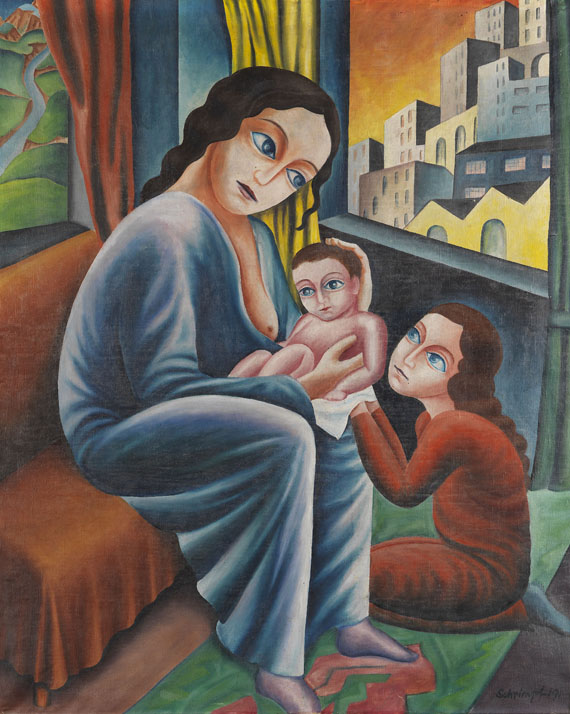 Schrimpf tried to work up the death of his wife Maria in his art and was predominantly occupied with the subject of mother and child around 1918/19, in order to raise a monument for his wife. In this context our painting "Stillende Mutter" was made. In terms of coloring it calls strong reminiscence of Franz Marc's "Blaues Pferd I". The composition is strongly influenced by early Italian Renaissance. Georg Schrimpf made a figure composition which for her calm statuary aspect reminds of depictions of saints from those days. He uses the then common triangular composition, which would become a fundamental component of his works. Their formal arrangement is a synthesis of traditional aspects with simplified forms and an emphasis on the intense relations between the figures. The wide-open eyes dominate the image and create an iconic effect, in order to emphasize the work's spiritual character. Georg Schrimpf takes traditional religious iconography to a modern world without becoming kitschy. The main motif, which resembles the depiction "Virgin and Child with Saint Anne", is flanked by a cool and repellent cityscape that occupies the composition's upper third part. The contrast between the intimacy among the three people and the towering city architecture could not be bigger. These contrasts obviously were Schrimpf's intention in such compositions. Through this picture Schrimpf elevates his deceased wife to a saint-like meaning and underlines his position as main protaginist of New Objectivity.
More Information
+
Sell
Get a free appraisal for a similar object!
+
Register for
Georg Schrimpf
+
Buying from A-Z
+
Contact a specialist
+
Georg Schrimpf Biography
Share