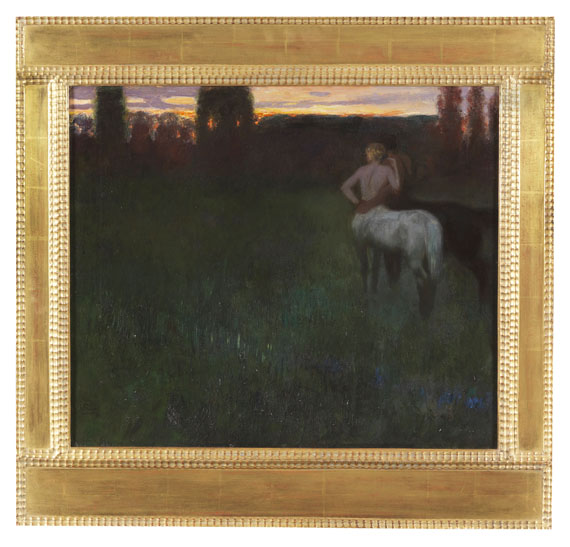 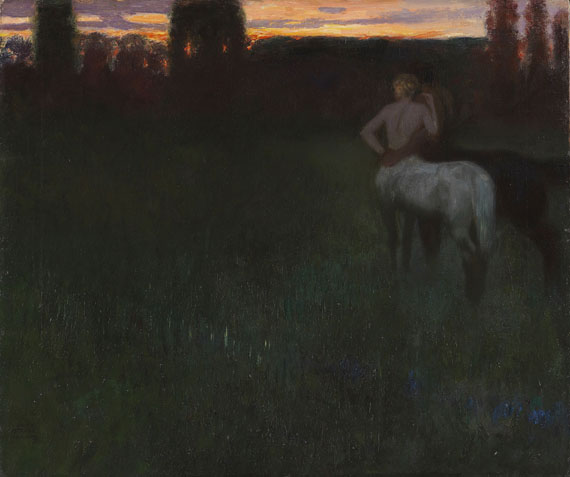 The figure of the centaur, as well as the faun and the nymph from Greek mythology, are among the most frequent motifs in the oeuvre of Franz von Stuck, rendered in numerous variants and variations. In most cases, however, the centaurs are conceived in their classic form as composite beings of man and horse pitting their strengths against one another and injuring each other as ferocious enemies in fierce battles (cf. "Kentaurenkampf", "Rivalen" or "Kentaurenfries"). However, Stuck also modified the type of centaur from classic mythology to meet his artistic needs. Accordingly, the large group of works dedicated to the issue of love and partnership also includes motifs of intimate centaur couples, such as the painting "Sonnenuntergang" from 1891 offered here. Around the same time he made works of a similar composition, in which Stuck depicts the centaur ("Resonanz", around 1891 and "Im Zauberwald", around 1893; Voss 45 and 94), or man ("Paar am Waldrand", around 1892 and "Sonnenuntergang am Meer", around 1900; Voss 63 and 218) on a clearing on the skirts of a forest (or at the sea), usually in rear view.
More Information
+
Sell
Get a free appraisal for a similar object!
+
Register for
Franz von Stuck
+
Buying from A-Z
+
Contact a specialist
+
Franz von Stuck Biography
Share