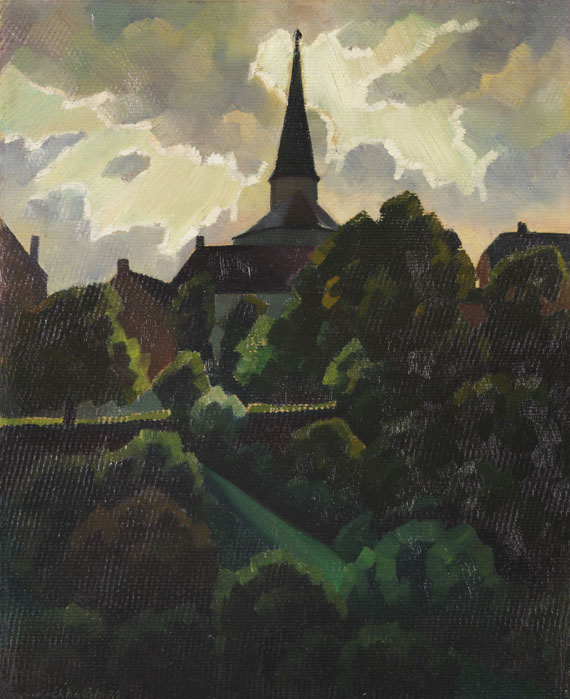 The development of Adolf Erbslöh's art is a good example of the overall course of German painting in the first half of the 20th century. Starting from late Impressionism, Erbslöh found his path to his very own Expressionism, which is most stiking in his works from before World War I, over Cubism. The influence of his contemporaries, particularly from Jawlensky, are obvious. However, Erbslöh opted for a less aggressive palette. His favor for light/dark effects, which provide a dramatic tension, as well as the view from below add a symbolic and romatic character to his paintings, which is even increased by the choice of motif. Erbslöh captured the mystical character of the rather unspectacular Eifel landscape, a region entirely unaffected by the painters' yearning for picturesque spots, by means of unusual light effects. The form remains well-defined and determines the image. Contrary to the opinion of some, references to New Objectivity are, if at all, hinted at. Adolf Erbslöh saw the landscape as a metaphor for an world of its own with a self-conception that did not require any corrections.
More Information
+
Sell
Get a free appraisal for a similar object!
+
Register for
Adolf Erbslöh
+
Buying from A-Z
+
Contact a specialist
+
Adolf Erbslöh Biography
Share