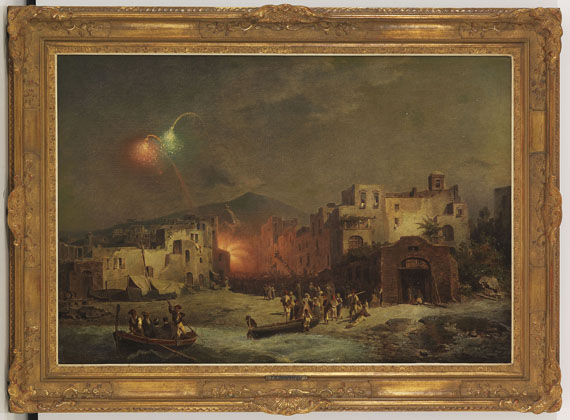 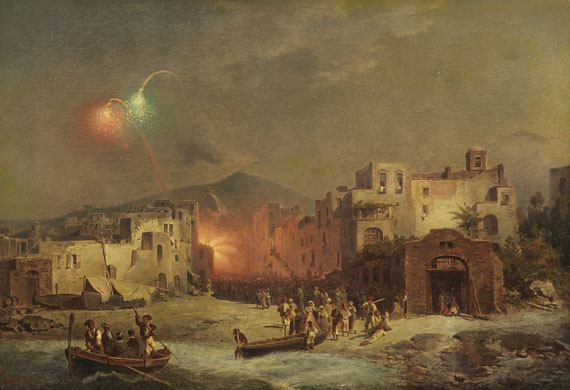 Franz Richard Unterberger was born the son of an art dealer in Innsbruck in 1838. He attended the Munich Art Academy and was a student of Clemens von Zimmermann and Julius Lange. In the following he transferred to Albert Zimmermann at the academy in Weimar. In 1858 Unterberger went to Milan, however, he had to return just a year later because of the outbreak of the war. After a stop in Munich he settled in Dusseldorf where he was in close contact with the brothers Oswald and Andreas Achenbach. After a first inspiring journey to Norway with Andreas Achenbach in 1860 and the great success of the resulting Nordiclandscapes, Unterberger repeatedly traveled to Norway, Denmark and the English and Scottish coast over the following years. In 1864 Unterberger relocated to Brussels and spent the summers in Neuilly-sur-Seine. Further trips took him to Venice, Southern Italy, especially to Sicily. In 1868 Unterberger exhibited the work "Partie aus Neapel" at the Wiener Kunstverein and showed the work "Sorrent, Golf von Neapel" at the World Expo in Vienna in 1873. He sold a lot of his works quite successfully at exhibitions in Munich, Brussels, Paris and London. Numerous honors are documents of his success, in 1874 he received the Knight's Cross of the Order of Franz Joseph from emperor Franz I. In summer 1902 Unterberger died in Neuilly-sur-Seine.
More Information
+
Sell
Get a free appraisal for a similar object!
+
Register for
Franz Richard Unterberger
+
Buying from A-Z
+
Contact a specialist
Share