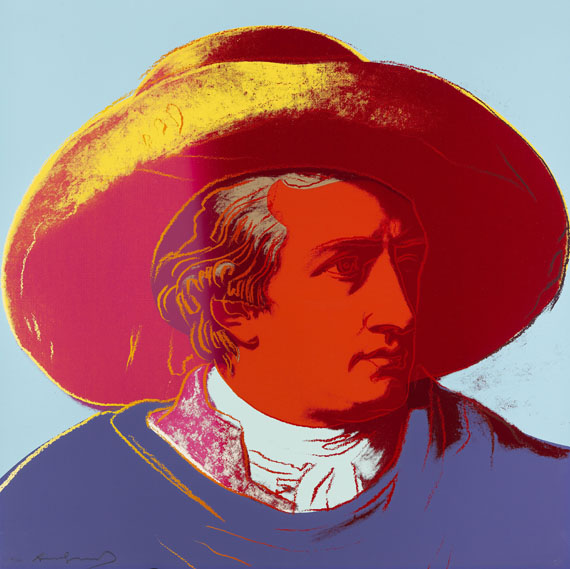 Essay
Within the field of graphic art, which occupies the largest part of Warhol's oeuvre, the model plays a decisive role. This color silkscreen is the first in a series of works for which an artwork of historic relevance is used as reference. For "Goethe" Warhol isolated a section of the presumably most famous Goethe portrait which Johann Heinrich Wilhelm Tischbein painted in 1787. Today it is in possession of the Frankfurt Städel Museum. Even though Warhol referenced a traditional subject in this work, further levels of meaning are addressed, by choosing Goethe and the incunabula of Goethe portraits, he chose a work deeply rooted in the history of German literature and in the "German soul". Despite using an entirely different content and motif, Warhol tied in with the series "Myths" that he had made a year earlier and which itemized American heroes like Mickey Mouse, Uncle Sam, Santa Claus and Warhol himself. Once more it shows that pop-art is not just some kind of loud and lurid aspect of consumer culture but a critical reflection of the society it roots in.
More Information
+
Sell
Would you like to sell a similar object?
+
Register for
Andy Warhol
+
Buying from A-Z
+
Contact a specialist
+
Andy Warhol Biography
Share