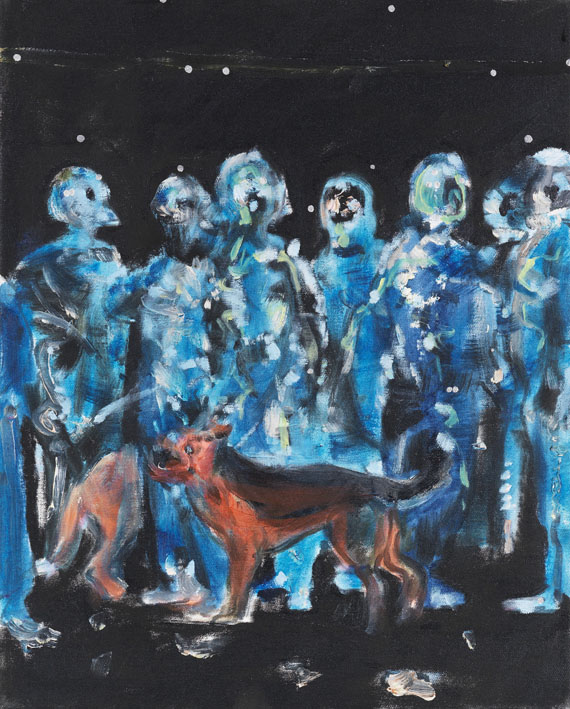 Essay
For his remarkably versatile both abstract and figurative works Daniel Richter is one of the most successful contemporary artists (SZ Magazin, 2015) at times he is even referred to as one of the "superstars of new German painting" (FAZ, 2007). His artistic creation underwent a radical transition around the turn of the millennium which led Richter from abstract, gestural pictures with neatly arranged grid structures, ornamentally entwined figurations and drip paintings to figurative depictions with a narrative undertone. With their examination of social and political themes the works stand "in the tradition of a painting that reflects on its means, that looks both back and ahead through the choice of motif and technique." (Christoph Heinrich, in: ex. cat. Daniel Richter. Die Palette, Hamburg 2007, p. 8). In a certain way the mostly large-size works call reminiscence of classic historical paintings. Richter is well known for these large formats, but smaller works like the one offered here from 2002 play a likewise important role in the artist's creation: "The small format helps me to understand the picture", Richter explains. "I can look at a small painting and find out whether its worth the execution on a large canvas." (ibidem, p. 162). Based on this work offered here, the larger-than-life work "Horde" (280 x 450 cm) was made in 2007, today it is on display in the likewise impressive underground annex of the Städel Museum in Frankfurt am Main. Also kept in strong shades of blue and red and in front of a dark background, the dark clothed figures and dogs in file face the observer, the just fragmentarily rendered faces emanate a certain threat. Even though it is a lot smaller, our work already has the same characteristics and qualities. The strange inhuman faces of the undefined figures that are arrayed like a wall, the dogs with their wide open muzzles and even the batons are already included in the composition. The smaller format does neither derogates the threatening and mysterious atmosphere nor does it affect the depiction’s peculiar presence. [CH]
More Information
+
Sell
Would you like to sell a similar object?
+
Register for
Daniel Richter
+
Buying from A-Z
+
Contact a specialist
+
Daniel Richter Biography
Share 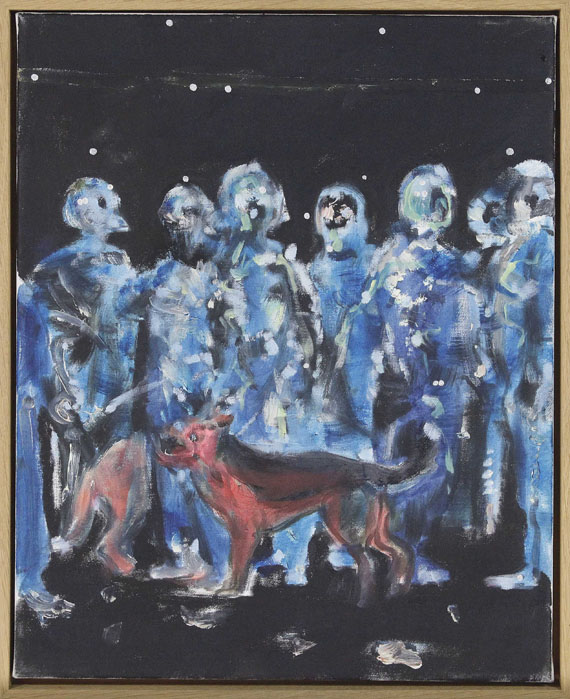