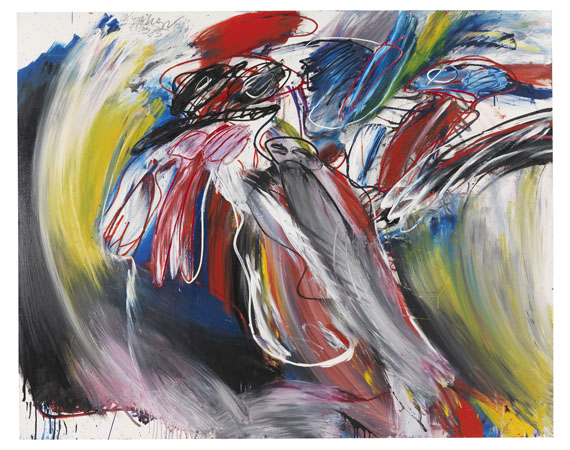 For the first time in the early 1960s the process-related character of Stöhrer's pictorial style becomes an intuitive and necessary part of the image development within his works. “As soon as I find a subject I stick to it” (quote from: Christiane Vielhaber, Walter Stöhrer, Kritisches Lexikon der Gegenwartskunst, p. 6).This means that Stöhrer prefers operating simultaneously on several paintings and thereby developing thematic cycles. The spontaneous element is central within Stöhrer's production process. Painting becomes action. We don't find any ornamental patterns in his pictures. Everything is expression and gesture of the artist. Thereby his dream worlds (or rather nightmares) elude any form of interpretation and the attempt to approach it seems to succeed only by using metaphorical comparisons. In fact, the titles of his work are the only elements pointing to the reality of an artistic existence and to a creative process guided both by reason and emotion.
More Information
+
Sell
Get a free appraisal for a similar object!
+
Register for
Walter Stöhrer
+
Buying from A-Z
+
Contact a specialist
+
Walter Stöhrer Biography
Share