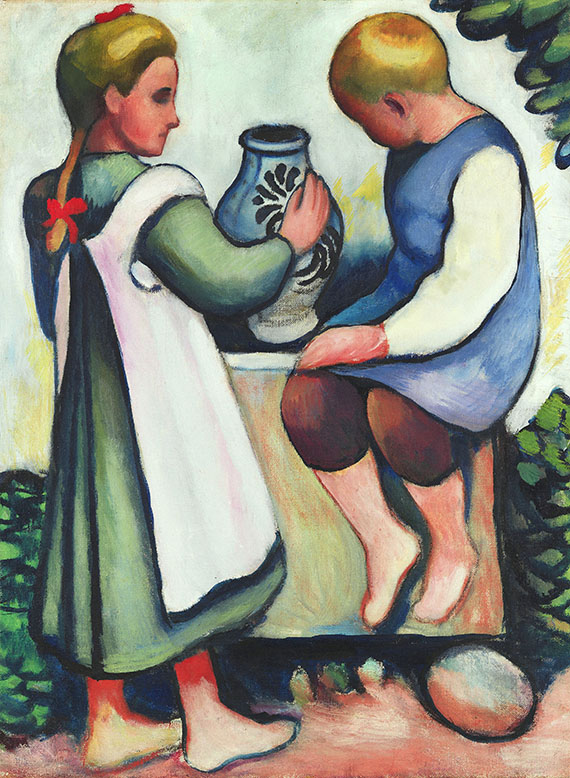 • Large-size work in intense colors with Macke's characteristic figures.
• From his important period of creation on Lake Tegernsee, one year after he had met Franz Marc and one year before the "Blaue Reiter" was founded.
• Only existing variant of the motif which Macke took on twice, the other version was destroyed in WW II.
• Notable exhibition history.

With a photo expertise issued by Dr. Wolfgang Macke on March 1, 1971.

"The year 1910 was very important for August's work and a very fruitful one, too. This was the first time that August basically found the peace necessary to develop his personality. The most different pictures came into existence. For some time he had a fancy for simple forms with strong contours. The way he saw the colors and how he balanced them was a very personal one." From Elisabeth Erdmann's memories of her first husband. The clear attribution of his works in terms of time and style counts among the most striking characteristics of his painting. In 1910 he made still lifes, portraits, landscapes and pictures of people that are characterized by a tremendousclarity. What else is particularly charming is the compelling arrangement of the composition. The girl in left with both feet on the ground holds the jug with a firm hand, while the boy sitting rim of the well in right seems to rest his eyes on the water's surface. Macke captures the characters in their surrounding almost like in a still life. This way the contemplative basic concept that the work emanates remains undisturbed. Owed to the memories of Macke's wife it is possible to determine the two children as son and daughter of the brewer's assistant Meier who worked at the Ducal Brewery Tegernsee and who was a neighbor of the Macke family. A second version of the picture, mentioned in the catalog raisonne with the title "Kinder am Brunnen I", used to be in the renowned collection of Bernhard Koehler (catalog raisonne number 276, p. 384), an early patron of August Macke and Franz Marc. This version was destroyed in an air raid on berlin in WW II.
More Information
+
Sell
Get a free appraisal for a similar object!
+
Register for
August Macke
+
Buying from A-Z
+
Contact a specialist
+
August Macke Biography
Share