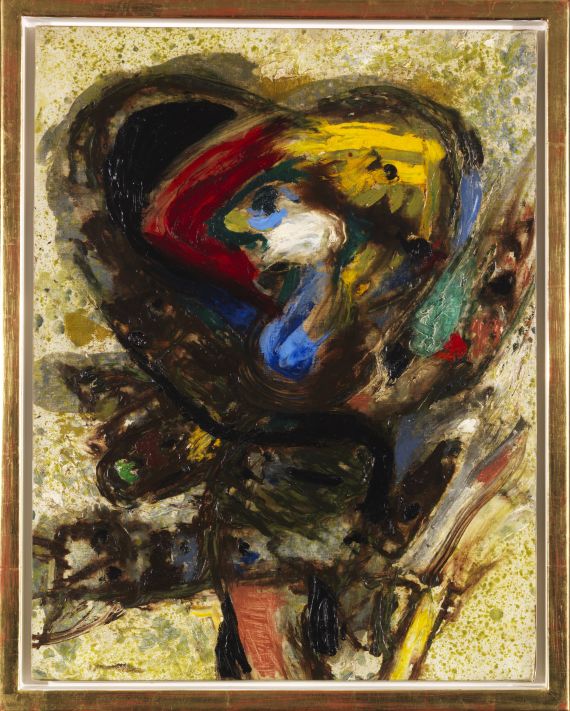 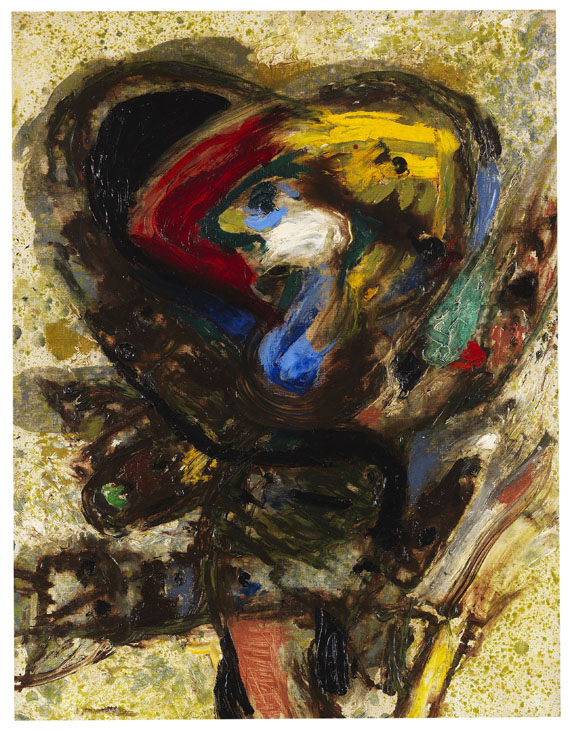 LITERATURE: Guy Atkins, Asger Jorn, The crucial years 1954 - 1964, illu. no. 918.
"They say my art had these Nordic traits: the undulant line, squiggled forms, magic masks and gazing eyes, the myths and the folk art. Maybe. My interest in Art Nouveau may also be part of it [.]“
Asger Jorn, quote from: Retrospektive, ARKEN Museum for Moderne Kunst, Ishoj et al 2002/2003. German supplement of Kunsthalle Kiel, pp. 43f.

In the vast creation of Asger Jorn the year 1955 is considered a "annus mirabilis“ (magical year). In early 1954 he stranded in Albisola Marina on the Ligurian Coast, works made that spring show first accounts of the very lucid lightness that would become Jorn's fundamental contribution to European art in the second half of the 20th century - a combination of Vandalic legacy and Mediterranean promise. Determining factor for the appearance of pictures from these first months in Italy is a different treatment of colors as it was the case in the works of Lyrical Abstraction. Jorn's daily occupation with the artistic possibilities and opportunities of experimental ceramics had direct influence on the picture's overall arrangement. Color is conceived as "matière première“ and employed accordingly. Over a short period of time the masterworks that Guy Atkins, author of Jorn's catalog raisonné, described as expression of the "crucial years“, came into existence. Jorn did not go unprepared to Albisola which had been a center of art ceramics since the 1920s. Withs its art hotspots Milan, Venice and Turino Northern Italy was a melting pot for various progressive tendencies in the mid 1950s. This was where Lucio Fontana conceived his concept of "Spazialismo“, the extended image space, Enrico Baj proclaimed the "arte nucleare“ and Alberto Burri made the world the picture's reality in his "Sacchi“ - objects taken from municipal waste. – And the sun is shining. Jorn moved into Fontana's old studio on Pozzo Garitta, the Square of Witches, and literally lumped together all the practical experience he had gained in Paris since the late 1930s and on his journeys through Europe during the years after the war. He won a new sense for painting through the matter itself and through finding new forms from formlessness. Jorn developed a method that can be best described as "Choreography of the Moment“. Inspired and encouraged by the writings of the French philosopher Gaston Bachelard, he creates his art, the moments of action and the motif from a form of feedback system between experimental activity with an open ending, philosophical reflection and the conditions of painting itself. "There is more truth in the depth of a picture than in the heights of aesthetic theory“ reads the inscription by the Belgian poet Christian Dotremont in one of his pictures. The large amount of pictures made in 1955/56 are characterized by a poised figuration, an individual "Figure Invention“ which Jorn had began with in the series of archaic images "Auf der stummen Mythe“ while he was still in Scandinavia. He had created a world of creatures beyond Surrealism, a world characterized by metamorphosis and transformation. In Albisola he realized a masterstroke, the stylization of the figure from the matter itself. "Danseuse Impertinente“ is one of the paradigmatic works from this new body of works. The painting not only shows a dancer, a "frantic Menad“ in motion, it also illustrates the "concept of motion“ itself through the composition and the process of creation, that is the application of the layers of paint. [AH]
More Information
+
Sell
Get a free appraisal for a similar object!
+
Register for
Asger Jorn
+
Buying from A-Z
+
Contact a specialist
+
Asger Jorn Biography
Share